END_OF_DOCUMENT_TOKEN_TO_BE_REPLACED

How do you use (navigate) blogs?

I’ve been working for awhile on giving my blog design a facelift. As tends to happen with design projects that are drawn out at length (as is the case when it’s not my full-time work), I know more at the end than I did at the beginning. I mean, yeah, that’s supposed to happen, naturally, with any project, but these ones that would otherwise be condensed into a short time frame take place over the course of months that are packed with learning that occurs outside their context. That learning tends to fall into either design (look at how much better I’ve become!) or programming (look at what I’ve learned how to do!). Sometimes it’s outside influences like new technology that didn’t exist before, or of which I did not know. Well, this time around, it’s not so much my visual skills or my technological skills, but my thinking that has changed and grown since I embarked on this miniature quest. And it’s quite, quite recent.

Blogs and websites are constantly evolving. As a result one can probably expect users to be evolving too — in fact, with the presence of RSS readers, we hardly need spend time on people’s blogs in our web browsers save to comment. User behaviour changes with technology. This is clear. So when I have a model for my blog that is almost 3 years old, I have to wonder… what is still relevant? What features do users actually use and how do they find information?

I googled this already but Google help me I didn’t find an answer. That, therefore, is where you come in. The question I pose you is: how do you use blogs? When you arrive at a post, what helps you move on to another post (assuming you enjoyed the content or found it helpful)? How do you navigate the information — through tag clouds, categories, recent comments? Are lists overwhelming or redundant?

Your feedback will help me determine what features are of most use to you when you read my blog. Thanks in advance for helping me out.

A side note: in its next incarnation, I expect comments to appear immediately on thirteen cent pinball. Hooray! The facelift is a modernization, rather than a redesign, so the overall visual “flavour” of the blog, if you will, shall remain the same.

The topic is grim, but my friend Paul Hillsdon got a large inside page photo and full-page article in the Province on the rally/gathering he and Trevor Loke have organized in Surrey this Sunday. (1 p.m. at the Central City Plaza, 13450 102nd Avenue, across from Surrey Central SkyTrain station.) We’re taking a stand together against gang violence. More info in the article.

Other friends have had letters in the Province published recently, and finally it’s my turn to get some ink—not in the Province, but in what apparently is even more important: the Surrey Leader. My letter is copied below in the format in which it was published.

In related articles, there’s a link to a Surrey Leader article about Paul, which I had not noticed before!

END_OF_DOCUMENT_TOKEN_TO_BE_REPLACED

DELTA – The Agricultural Land Commission’s decision to reluctantly hand over prime Delta farmland to Campbell government bulldozers reveals the extent to which the integrity of the farmland protection process has been destroyed, say New Democrat MLAs Charlie Wyse and Guy Gentner.

The commission has reluctantly agreed to remove 90 hectares from the Agricultural Land Reserve so the Campbell government can proceed with its preferred route for the South Fraser Perimeter Road, despite widespread public opposition. The commission said it “deeply regrets that suitable highway alignment alternatives to the use of prime agricultural land were found not to be acceptable from transportation and environment perspectives.”

The news follows last week’s discovery that construction along two sections of the proposed route started before any decision had been finalized.

END_OF_DOCUMENT_TOKEN_TO_BE_REPLACED

How the oil crisis will change the face of Fraser Highway

Increasingly, the news in the blogs I read has focused on climate change, biofuels and alternative energy for fueling transportation… and with good reason. We’re faced with a crisis, and we all know that. Many of the solutions already exist, in the past before depedence on oil became the norm for most transportation, and gave us solid plastic, plastic bags, chemical fertilizers, fat-free ice cream (propylene glycol, anyone?), and the American Dream: a big house on a big lot in suburbia. Well, Canadians have made that dream as much of a reality as our neighbours to the south, and in greater Vancouver, the hidden evil of it is present in perhaps no stronger a form than in the suburbs of Surrey and Langley.

END_OF_DOCUMENT_TOKEN_TO_BE_REPLACED

Another indication there’s something wrong with us

The “Absolutely Ridiculous Burger,” made with beef, bacon and cheese, was delivered on a 23-kilogram bun, The Detroit News and the Detroit Free Press reported. It sells for $350, and orders require 24 hours’ notice.

How much water, corn/other feed, cow’s meat, cow’s milk, gasoline, energy and waste products went into making that? How much of it was meat? Moreover, how many third world people would it feed? How many of them would be shocked that humans consume crap like that? 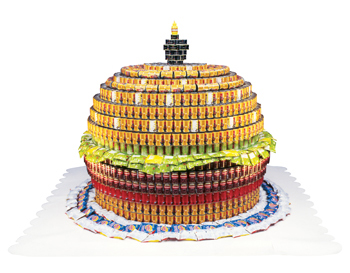 Meanwhile, in our corner of the continent, Canstruction® Vancouver starts showing tomorrow. I wonder if we beat any records for numbers of cans this year? All cans/food packages go toward nourishing the people who rely on the Greater Vancouver Food Bank. There, they appreciate the value of food! 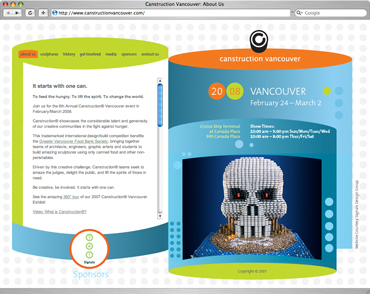 Canstruction® Vancouver has had their website redesigned and the fun, new site is now live! Highlights include image galleries of canstructions from their 5 annual events. The next one happens February 24th – March 2nd, 2008 at Canada Place.

Canstruction® is an international event to support local food banks. Teams led by design professionals, architects, and engineers build amazing sculptures from full cans of food. The Vancouver event benefits the Greater Vancouver Food Bank, to which all cans used and donated are given. Join in the fun and support this great cause! Get involved by joining or entering teams, attending the exhibit, volunteering, or becoming a sponsor. See you there!