END_OF_DOCUMENT_TOKEN_TO_BE_REPLACED

Vancouver’s buses get a little arty 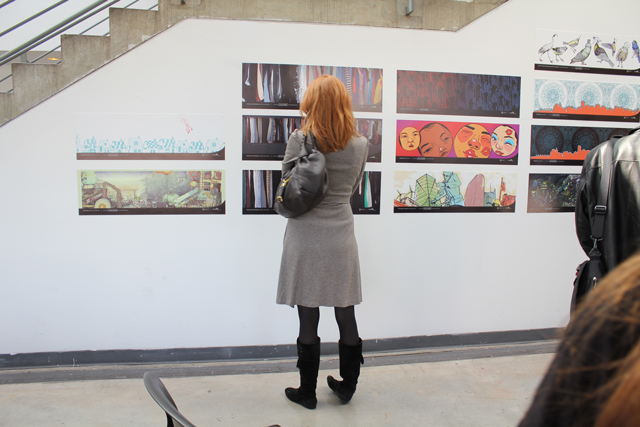 Photo from The Buzzer blog

Oh my goodness! I’m nearly at my $300 fundraising goal as I write this. Please donate now to support the David Suzuki Foundation. Here’s why I’m fundraising with a daily post!

I was excited when I noticed a dramatic, beautiful piece of art hanging over my head on the bus the other morning. It was Emily Carr University student Alison Woodward’s work (see the eighth image here), one of 31 images by 18 artists studying at the school. It’s TransLink’s new pilot initiative, which is “building on the success of the Poetry in Transit program, which seeks to bring visual art into the transit environment through on-vehicle advertising panels featuring emerging artists.” I quite enjoy the Poetry on Transit panels when I find one I like, and so far, in Art on Transit, I love what I’m seeing.

END_OF_DOCUMENT_TOKEN_TO_BE_REPLACED

Changing the course of the city and country: green jobs and transit now!

Last Monday’s anti-Gateway demonstration in Surrey; I’m in there somewhere! Photo from GatewaySucks.org

Stephen Rees’s blog has been bursting with exciting news lately, nearly every single post. When I say exciting, I don’t necessarily mean good, but the headlines do indicate multiple turning points in a potentially positive direction in what has so far been a steadfast plot on the part of our provincial and even federal government to proceed with Gateway.* At a time when gas prices have begun to increase once more, international shipping is declining, and peak oil is on the horizon, our provincial and federal governments are teaming up to build more roads and expand the port on the premise that it will create jobs. While I agree that creating jobs in British Columbia is of utmost importance, the economic benefits of redirecting funding toward building transit would more than double the number of jobs — and they would be local. That keeps BC money in BC. In fact, a study by the Canadian Urban Transit Association found that three times as many jobs are created in public transit as highways. Public transit encourages smart growth, reduces congestion and pollution (thereby making a grand step toward the Province’s 33% reduction in GHG goal), and has minimal environmental impacts.

Want to help steer the government away from highway jobs and construction to green jobs and transit, all across Canada? Here are some petitions and events happening right now:

– Rail for the Valley: bring back passenger rail now

“On January 27, our federal government will introduce a new budget and invest billions of your tax dollars on stimulating the Canadian economy. Let’s make sure that as much of the stimulus package as possible is green.” Send a message to Finance Minister Jim Flaherty asking the government to invest in green jobs and green infrastructure. (David Suzuki Foundation)

Read my letter. (Americans can use the Wilderness Society’s page to send a letter to Congress on the same issue.)

END_OF_DOCUMENT_TOKEN_TO_BE_REPLACED

“The Transit for Tomorrow plan begins to fix our woefully inadequate transit with fiscal prudence during these times of economic hardship. Construction of the lines will boost the local economy and create jobs, while addressing our transport, health and environment issues all at the same time,” said Hillsdon.

END_OF_DOCUMENT_TOKEN_TO_BE_REPLACED

Event recap: VALTAC forum on Rail for the Valley

On Saturday I attended a forum put on by VALTAC (Valley Transportation Advisory Committee), hosted at the Langley Township Hall. (Nice building!) It was a statement toward our poor transit network South of the Fraser that all five speakers drove to the venue. Stephen Rees joked that the TransLink trip planner wouldn’t even give him a trip itinerary because it would take either more than 3 hours or more than 3 transfers. My proximity to the Hall made it easy enough to get there, if you consider a bus late by 7 minutes then a 20-minute walk easy. And Langley isn’t exactly known for being pedestrian-friendly.

The forum was about getting better public transportation South of the Fraser, mainly via rail connections. There is much support for one solution, spearheaded by a group called Rail for the Valley, which would reinstate the Interurban that ran from about 1900 to 1950 all the way from Vancouver to Chilliwack. Maps at the venue showed the dense urban centres through which this rail line passes. (Today it is used only for freight.)

END_OF_DOCUMENT_TOKEN_TO_BE_REPLACED

How the oil crisis will change the face of Fraser Highway

Increasingly, the news in the blogs I read has focused on climate change, biofuels and alternative energy for fueling transportation… and with good reason. We’re faced with a crisis, and we all know that. Many of the solutions already exist, in the past before depedence on oil became the norm for most transportation, and gave us solid plastic, plastic bags, chemical fertilizers, fat-free ice cream (propylene glycol, anyone?), and the American Dream: a big house on a big lot in suburbia. Well, Canadians have made that dream as much of a reality as our neighbours to the south, and in greater Vancouver, the hidden evil of it is present in perhaps no stronger a form than in the suburbs of Surrey and Langley.