Get in gear for the 10th annual Bike to Work Week

I have to admit, I miss my bike commute. (I bet you’ll rarely hear a driver say that about their car commute!) I cycled to work during the warmer months for about three years, which was, for the majority of that time, 21km each way. (Yes, it’s doable!) Sometimes on my morning ride, I took the False Creek sea wall and really enjoyed it. If you haven’t yet discovered the bliss of biking to work and your commute is under 25km, this week is a perfect one to start. Today is Bike Day in Canada and the start of the 10th annual Bike to Work Week spring edition, ending June 5. While I don’t get to enjoy the thrill and freshness of an early morning ride anymore, I can attest to how awesome biking to work is. Here’s my take.

END_OF_DOCUMENT_TOKEN_TO_BE_REPLACED 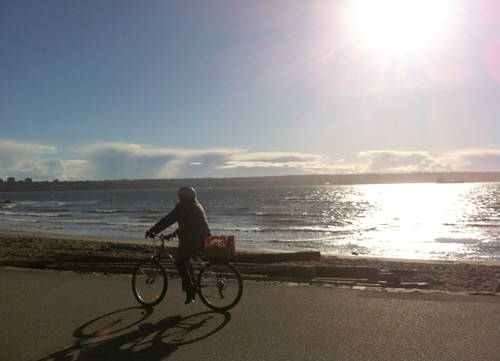 END_OF_DOCUMENT_TOKEN_TO_BE_REPLACED

Among other cities paving the way (literally) for higher bicycle ridership is London, England. They’re probably better known for congestion pricing for car traffic (one of the first, but not the first, cities to implement it) than cycling, but their current mayor wants to improve their performance with a new plan that includes a 12-route bicycle commuter network radiating from the city centre, a bike-sharing program launched last summer and a new bike police unit.

In place for a few months now, the two new, blue, bike superhighways are quite successful, increasing by a whopping 70% the number of cyclists on the streets compared to their pre-superhighway incarnation (comparing October 2009 to October 2010).

New figures show that the number of cyclists along the first two Barclays Cycle Superhighway routes, which run from Merton to the City and Barking to Tower Gateway, has risen by 70 per cent with increases of 100 per cent or more seen on some sections during peak hours. — Transport for London

It’s hard to argue with that. I hope to check them out first hand when I visit the city this spring. Have you been there and tried them out? What did you think?