I saw a few people I recognized and said hello to my friend Phil, who was staying cool in shorts and yellow shades. Finally summer decided to show up after “Juneuary.” And as I expected, earlier in the day I complained about the heat, but I have only to get used to it! 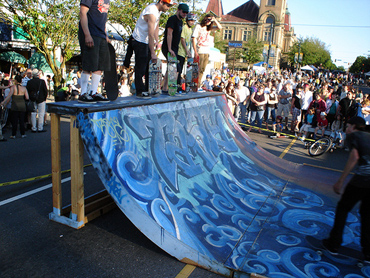 When I left the festival and returned to car culture, the noise and speed was… maybe not a shock, but definitely unpleasant. I kept looking back at the street festival, and would turn around again and really notice the difference. On one side: people, relaxation, fun and community; on the other: unpleasant noise, rushing, machines (no people), congestion. On an ordinary day there may be less traffic and more people where I was standing, just because everybody was at the festival and there was less room for cars to move around, but the difference was nonetheless obvious and striking. Check out this photo from the event on Commercial Drive. The street is packed with people! It reminds me of Davie St. after the fireworks are over and the flood of people surges up the street, filling it.

As I went I thought about how we could close off the street to cars but still allow good transit. It couldn’t exist within a street closed off, but a streetcar (LRT) on the adjacent street (Quebec St.) would serve the population well. An LRT down the middle of Main St. wouldn’t necessarily allow what we saw today, but it would allow tremendous freedom still over what exists and only caution is necessary to ensure safety. (LRTs have drivers so it’s not much different from a trolleybus in that regard.) Just thoughts.

Yesterday I was reminded of Walk Score, a website that measures how walkable any given neighbourhood is. Punch in your own address and see what shows up. Neighbourhoods are rated out of 100, and the higher number the better. As for mine, well… it gets a pitiful 17. I am not surprised. The neighbourhood in which this Car-Free event was held gets upwards of 78! Just goes to show. Anyway, a community such as Cloverdale (where I currently live) would benefit from a pedestrian-only area once the older neighbourhood has been revitalized. I’m just not sure it would have much demand, partly because there just isn’t that much there. Distances are also highly deceptive because of the way streets are named, e.g. 56th to 58th isn’t two blocks, it’s four, because of 56A and 57A or whatever it is. So forget walking from 56th to 64th! It’s like walking from False Creek to Waterfront downtown! Surrey Central ought to join in next year or do something on its own this summer as it (Surrey) claims status as Cultural Capital of Canada 2008, but I am not yet convinced.

All-in-all, it was a fun, eye-opening event that has clearly made me think about my own neighbourhood and Vancouver as a whole. Gordon Price was in the West End and made a wonderful post with plenty of pictures.

Did you attend a Car-Free Day yesterday?