Traffic congestion is a huge issue and is always a complaint on the North Shore. Fewer cars on the road not only makes commutes faster for drivers, but helps buses move along more quickly, too. And once in awhile, one gets stuck in traffic on a bike. (Just once in awhile.) While passing cars stuck in traffic jams can be fun, it proved dangerous to me once when I almost hit a car which was turning left through the gap in the motionless vehicles I was passing. Building more road space is not the answer — more transit is. With more growth anticipated, we need a smart, forward-thinking solution in place, and that solution is before us now.

4. …and because traffic pollution is deadly.

Vehicle exhaust contains a cocktail of toxic pollutants. When I’m cycling next to traffic, I’m breathing those fumes in pretty hard, so I’m eager to reduce the number of cars on the road. This danger applies to drivers and their passengers, too, who are exposed while driving to pollutants that cause respiratory infections, heart attacks and cancer. The nitrogen dioxide-coloured smog that hangs over the city during dry spells is also really gross, but just in case you thought it only happens in the summer, I could see it the last two times I took the ferry via Tsawwassen, in February and March, where from a distance it’s visible blanketing the region like a sour, low fog. 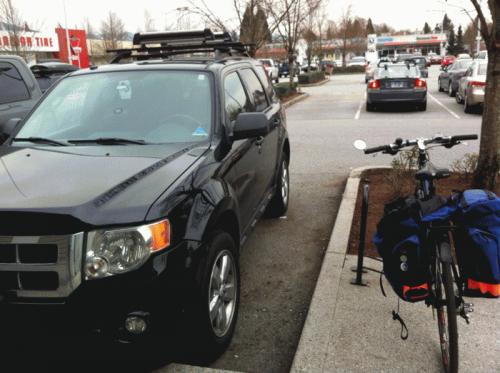 That’s a lot of metal. (And my humble bike.)

5. I want to see a more equal and just society.

More affordable transportation (e.g. transit) gives low-income earners more opportunities to find work that is otherwise not accessible without a vehicle — whether it takes too long with current transit trips or transit simply doesn’t serve the area at the right times, if at all. (I lived in Cloverdale, Surrey for two years, where transit sucked.) This helps their kids get ahead, too, since money that would otherwise be spent on a car could instead go toward extracurricular activities and post-secondary education. The Canadian Centre for Policy Alternatives has a great article on this:

The proposed new transit is particularly important to low-wage and immigrant workers, who often have to commute long distances for work, and who frequently work night shifts when transit options are limited (the proposal plan would see a doubling of night bus service hours). And it’s also of special importance to youth and seniors, who rely more heavily on transit.

6. I hate waiting for buses.

And as a result, I sometimes miss them. But a frequent, reliable transit network is attractive: if you miss your bus or train, there’s another one in 15 minutes or less! The more frequent the buses are, the lower the risk for the rider, and the greater the convenience, so it’s more likely to attract ridership. Build it and they will come. And stop waiting.

7. I want things to change.

Voting No solves nothing. We will still have the same complaints and the same problems, and they will get worse before they get better. Voting No doesn’t send any messages to TransLink or the Province that we want change: in fact, it says we’re happy with the status quo. That we’re ok with starving our transportation system. What we have isn’t perfect, but it’s damn good. Don’t you want it to be even better? I do.

I’m always doing my best to thwart climate change. You can, too. When you get your ballot in the mail this week, please vote yes. Here’s David Suzuki with more on that:

Also check out Guy Dauncey’s article in the Georgia Straight for 10 great reasons to vote yes!

Join me at Move Your City, Move Your Body! A Transit Voting Party! on March 28th in Vancouver, presented by We Can’t Wait!