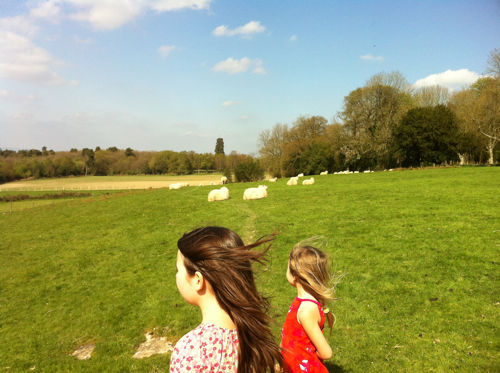 My nieces and sheep on a farm in southern England

In April I left for England by myself for a two-week stay near London with my sister and her family. Between sparkling London and the vast, gorgeous countryside dotted with newborn lambs, I enjoyed nature, food, art and time with family. A day trip to Brighton (a worn city coated in stickers) gave me my first chance to dip my feet in the Atlantic ocean. Unfortunately the merry-go-round was closed for repairs. On my own in London and compelled to find anything ridiculously ancient produced by humans, I located stone tools about 100,000 years old that rendered their mummified roommates at the British Museum somehow less mindboggling.

My sister and her kids came home in the summer and went wild over the salmonberries and huckleberries. The latter were staggeringly more abundant at my next destination. 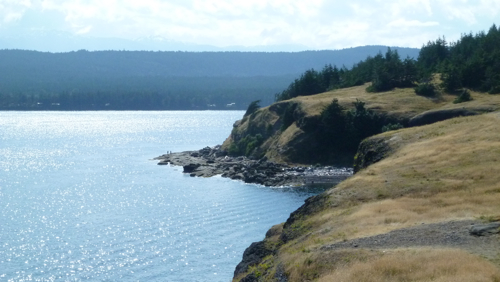 Every summer for 12 years, I’d been dreaming about a return to Hornby Island (it would be my sixth visit). Merely a month into my relationship with Robbie, I said, “I want to go to Hornby Island,” and looked at him. It was a bit of a crazy proposal: let’s go to Hornby Island, by bike, three weeks from now. How many kilometres is that? 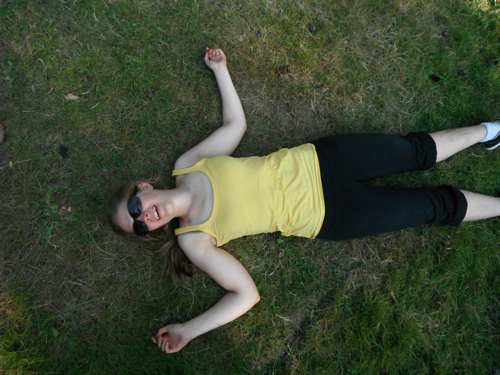 Round-trip, it was nearly three hundred. Fuelled by fresh fruit, eggs, cheese and a mutual chocolate addiction, we pedalled the 100 or so kilometres that took us from Nanaimo up to Fanny Bay, up and across Denman Island (at a feverish pace after stopping to buy Denman Island Chocolate), and up the steep hill on Hornby to our campsite where I was all too happy to sprawl out on the grass for a rest. Then a few days later, we did the reverse. It was exhilarating. Granted, the late-night home stretch thanks to a tardy bus, when we thought our ride was over, I could have done without! It’s another piece of the epic journey.

We kept bumping into a fellow who was telling everybody about the evening’s meteor shower. (Turns out it was the July Aquarids, which I’d forgotten about.) I didn’t get out of the tent that night but if the Milky Way in that untainted sky was any indication, it must have been pretty spectactular. 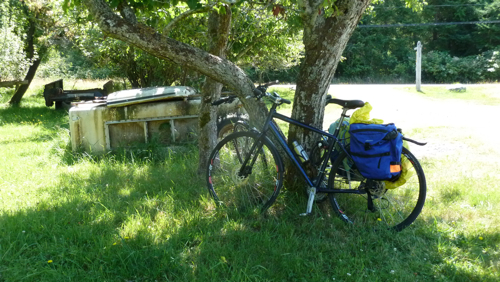 I was fourteen the last time I’d been to Hornby. In some ways I feel like time has changed the place little, while it’s changed me a lot. I sought out the locations I’d been to growing up — sandy beaches and sandstone shoreline, mainly — partly for nostalgia’s sake. My attempt to relive how I had felt there became, rather, an experience of it anew in a way that fit my deepened relationship with nature. Some of the places we didn’t find but they’ll be there next time. We both have a desire to go back. For Robbie, it had been a year; for me it had been long enough to etch memories like the hieroglyphs in sandstone.

Ironically, I recalled a brief childhood memory in which I saw a couple on a bicycle road trip, somewhere on the highway, and possibly with a kid in tow. At the time I thought, “I want to do that someday!” Years later I remembered that, thinking, “I would never do that!” And then I did — minus a kid of course — and can’t wait to do it again. 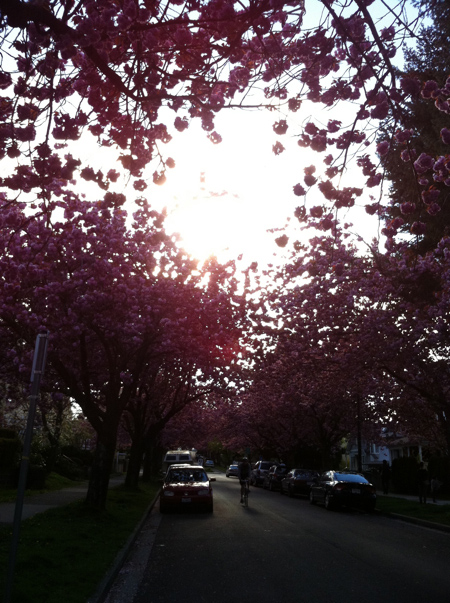 Cherry trees on the 10th Ave bike route in Vancouver

In 2011 I started commuting the full 4-day week to work and the entire 20 km, including the bridge over which I used to bus-bike. When I came back from England halfway through April, I had no bus pass for the first time in years. I was too ambitious (or wimpy) and couldn’t do the whole two weeks by bike, but at least it had me conquer the brutal uphill direction of the bridge for the first time. Over the summer I realised that even if I have to drag myself out of bed in the morning, once I’m on the saddle I’m alert and raring to go. In June, I was so angry at TransLink for taking away my evening express bus that I booked it home on my bike in one hour — faster than bussing. I managed to have two minor bike mishaps that included a graceful “North Shore dismount.”

Swimming in the ocean in Vancouver wasn’t nearly as exciting as the quick, rolling waves of Tribune Bay as the tide came in on the island, but perhaps I made up for it with my first two outings on a stand-up paddle board. I took two shriek-inducing plunges in the frigid water of a river in the canyon, which others cannonballed into as if it were the same temperature as their skin. I drank from that river, a unique taste. 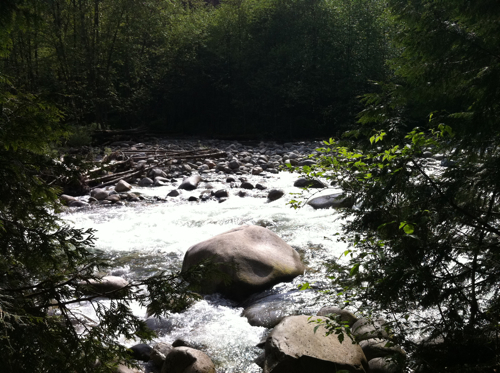 Robbie and I attempted to pick 300 lbs of blackberries — my grandparents’ alleged record in a season — and fell quite short at about twenty. Strangely, a patch that in my opinion was the “jackpot,” draping over clambering-sized rocks hot from the sun, became a parched wasteland a week later. Blackberries aren’t the same when frozen and I think we ought to eat them fresh, baked or canned from now on. Robbie and I picked some expressly for his roommate’s incredible blueberry-blackberry pie, which a few of us in the kitchen schemed to eat in secret at the party. “What pie?”

Robbie hadn’t been to Victoria for 21 years. I wanted to go because of how I anticipated it would feel at Christmastime. We both needed a vacation.

Between the book stores, wool shop, eco shops and restaurants, we got our fill of the tourist-consumer aspect but we both agreed our favourite part of the trip was our long walk through Beacon Hill Park. 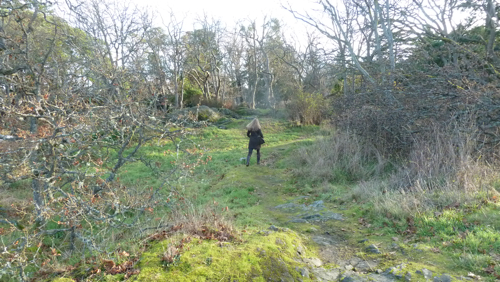 It began humbly with craggy rocks over which I insisted on prancing. The hill didn’t let on what lay on the other side of another hill, however, which surprised me the most. In between was a pond, busy with ducks, which had in the middle an island that reminded me of the Berenstein Bears book No Girls Allowed in which there was a clubhouse on an island in a pond (I think). Anyway, the park is much more vast than I expected, and we ended up taking the long way home around the shoreline, til our feet wanted any bench in sight. But it was beautiful. 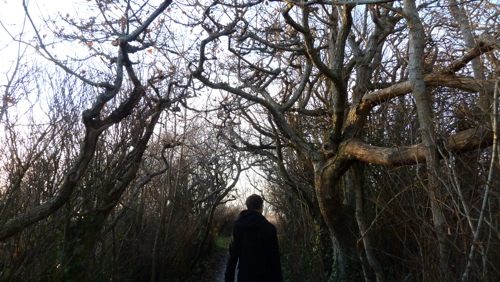 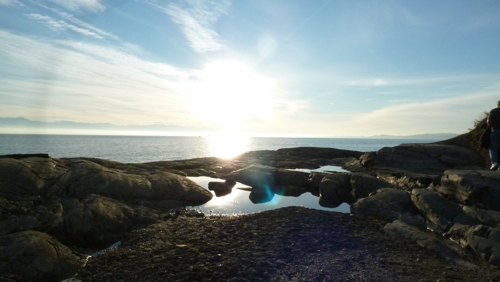 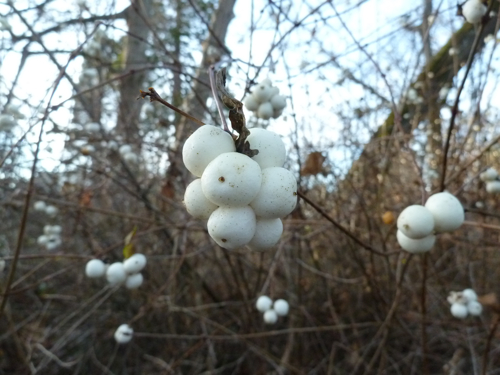 On the first day of winter — still no snow in sight — I whizzed around the hills of North Vancouver doing errands on my bike. I laughed at the traffic clogged up on Main St while I began a cycling-related parody of Jingle Bells I didn’t have time to finish. “What fun it is to ride and sing a cycling song tonight! Oh, jingle bells, driving smells, go and get a bike!” Hum…

I wrapped up the year in the company of friends and family I didn’t know a year earlier, and with a new man to share the joy. 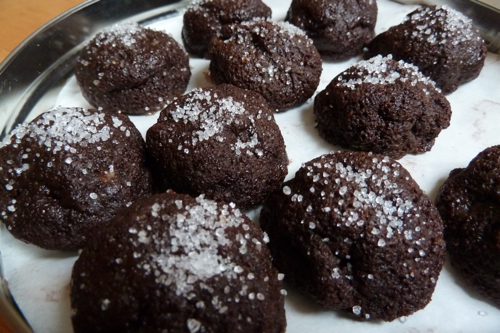 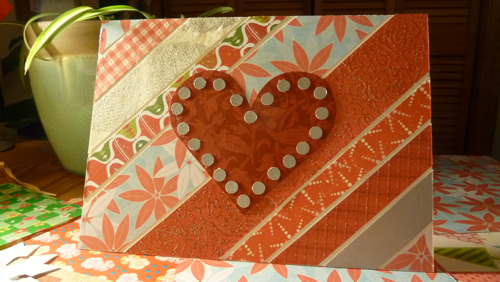 Tweet
Posted at 3:17pm. Tags: cycling, foraging, london, travel, vancouver
NEXT Are you in a toxic relationship with your household cleaners?
PREVIOUS Nature and night: Moving from the woods to the city