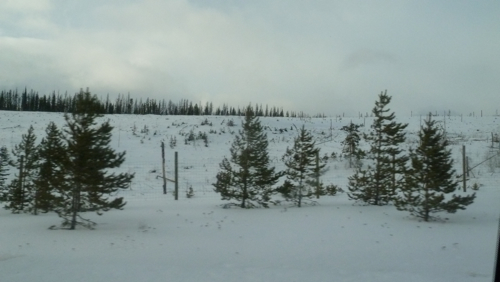 Snow on logged forest next to the Coquihalla in December

I’ve been meaning for some days to write a year-end blog post for 2010, but I’ve been too busy doing a New Year-inspired purge of things like old phone bills, unread newspapers, and other mainly paper-based ephemera. When I considered with a week left of holidays what things I’d been meaning to do at home for ages, I drew up a pretty long list. Of course, writing a blog post was on it, but when I settle into a rare purging and organising mindset, this nostalgic pack rat has to finish the job with swift, devoted action. So here it is, a bit late. 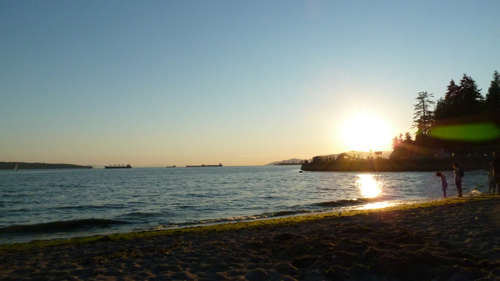 2010 to me wore two very different faces. To its credit, I was able to witness the incredible sockeye salmon run; the Olympics brought our city to life especially when Canada won gold in women and men’s hockey (and Finland earned bronze in both); I bought a new and better bicycle; the website I designed won a Georgia Straight Best of Vancouver title; I caught up with friends and relatives not seen in years; and I enjoyed concerts by my three most favourite bands. 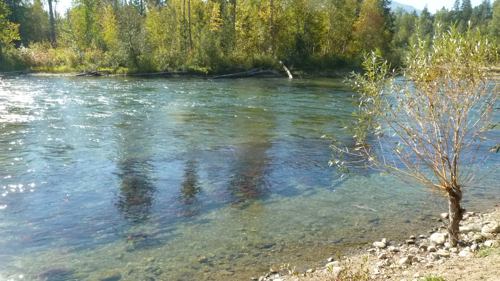 Salmon ready to spawn at Adams River in October

Then there was turmoil. I fell off my (old) bike, tearing a shoulder ligament and scratching up my calf. Two months later the naughty bicycle was dragged under a bus when the bike rack’s spring-loaded arm failed. It lived to ride again, and in both instances was spared by my MEC panniers — I mean saddlebags. In October I had sudden abdominal surgery, my first surgery excluding dental, and it was probably the hardest thing I’ve had to cope with.

BC’s main provincial party leaders resigned along with the federal Environment Minister. The gulf oil spill, Haiti’s earthquake, and Pakistan’s flooding brought tragedy on an immense scale. And I would argue the year’s extreme weather, hot AND cold, was climate change rearing its ugly head. (Make sure your mitts are 100% wool, not acrylic.) 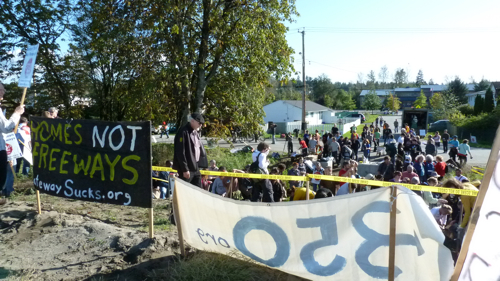 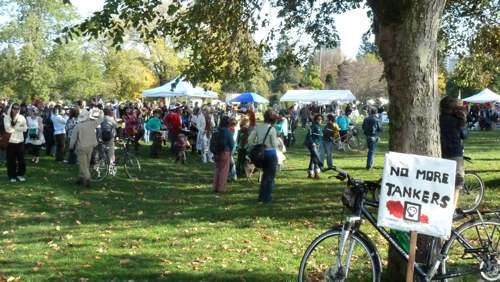 Crowds at the No Tanks! rally in October

But out of all this, on a personal level, some of this trauma proved to be blessings in disguise. The fall off my bike helped me gain confidence in riding because I know now that I can react quickly when I’m falling. The bike smushing forced me to consider a better one, and I was thankful it didn’t happen somewhere busier or to somebody else. My angry appendix revealed two other conditions — not that it made it any easier to deal with, but not knowing would have been much worse. All three showed me how amazing my friends and family are, the kindness of strangers, and the care of good doctors, nurses and my naturopath. (Thanks Hal.)

You may not realise you have courage, stamina, or the emotional resilience to deal with a barrage of challenges until you’re in the midst of it. But it’s there, and if 2011 throws you a curve ball, take it with grace, smile in spite of things and look for the positive even if it’s, “well, it could have been worse.” And it won’t be, because all of us made it better.

Tweet
Posted at 10:30pm.
NEXT 7 simple ways to reduce bathroom waste
PREVIOUS Why we need biodiversity, not monoculture