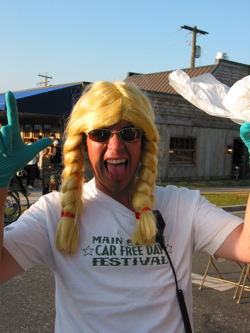 I was an official photographer at Main St in addition to guarding a barricade for the morning shift. For the first time ever I had to change out my camera card! (I’m overzealous.) Highlights of the day included several music stages (a pair of young rappers were incredible), skateboarders, lots of dancing, people skipping rope and lots of street art.

Like last year, it was amazing to see the street flooded with people. It’s one special day but it does make me wish we had permanent spaces like this in Vancouver, as in Europe. The sense of community it generates is astounding, particularly on the Drive where the communal activities appear more ad-hoc and random. It’s utterly liberating to walk around the street without worrying about vehicles. The air is cleaner and it is noticeably quiter — you have instead a merging of different music and human voices, very organic and comforting sounds, rather than the ugly whooshing and honking of the fast-paced, machine-only car-filled areas (devoid of real people). The dichotomy (see further down for the post-event pic) inspires thought. 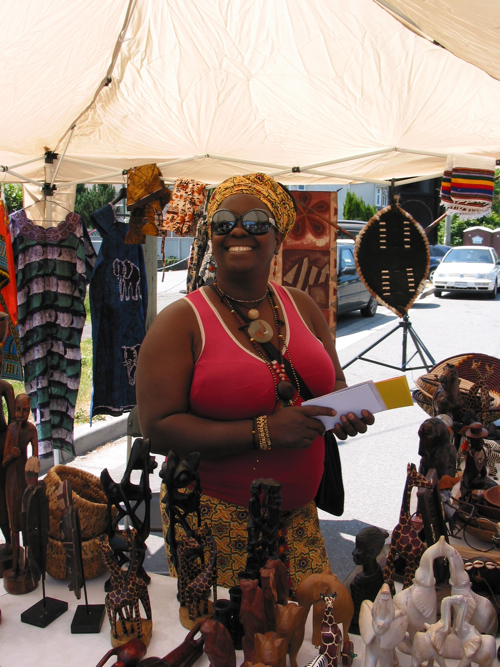 She was dancing (Main St) 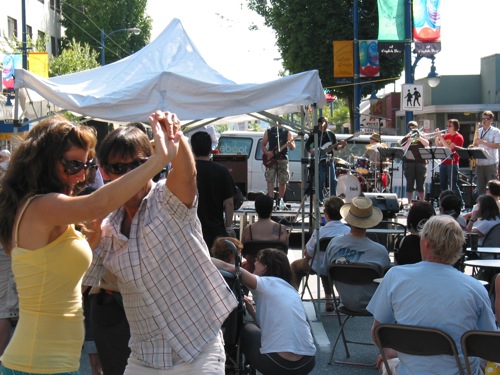 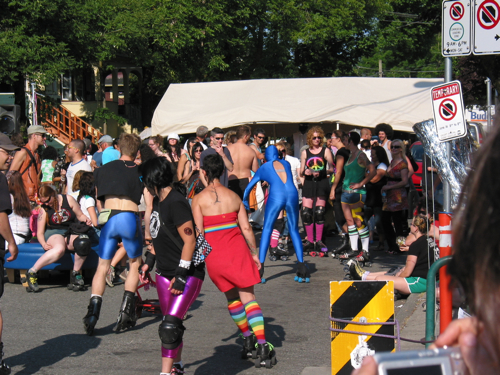 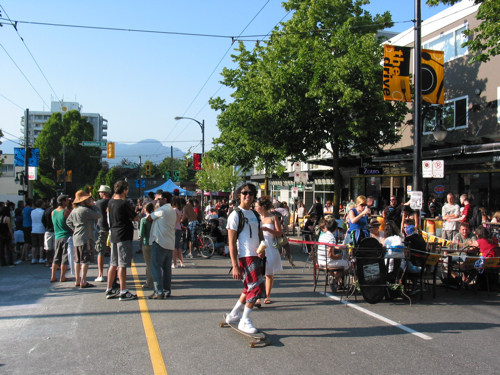 He smiled for me (Commercial Dr) 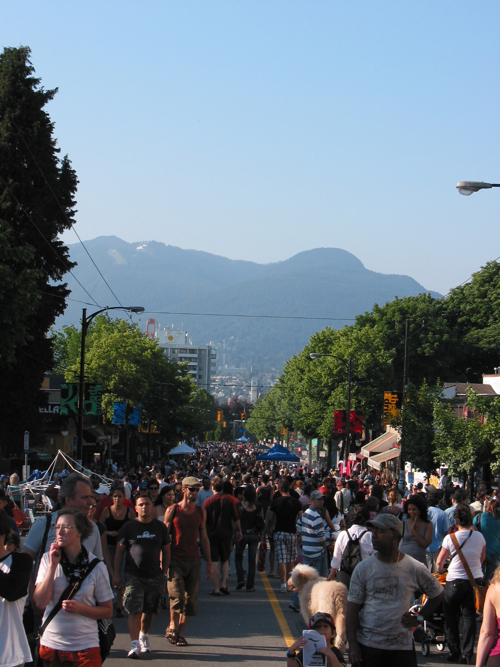 Commercial Drive was supposed to shut down at 6:00, but at 6:30 I was still there and we still owned the street. I loved it. It’s really the way it should be, even though I’m well aware that on an ordinary day there likely wouldn’t be thousands of people on the street. I can only guess how long it took to release the Drive back to vehicles; Main Street, on the other hand, cleaned up and opened up very smoothly, with much credit to a fabulous gang of volunteers and great vendors. 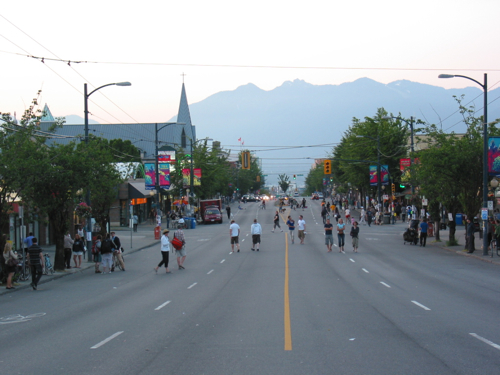 Near closing, still on the street (Main St)

I didn’t catch it on camera, but near the end of the day a man sailed down Main St doing a handstand on his skateboard! It was quite the sight. Early in the day two boys were coasting down the hill on their bellies on their longboards. The kids at this particularly family-oriented event appeared to be having a blast. 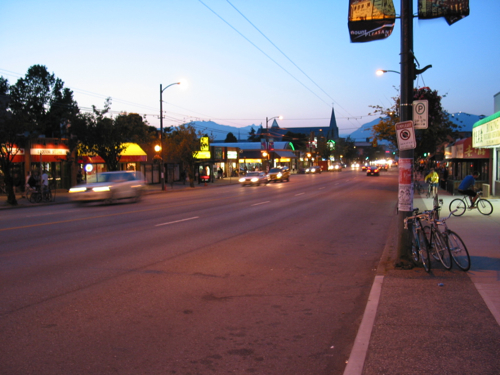 The clear dichotomy between car-free and car-full is apparent after hours.

On the way between Main and Denman, I checked out the Bixi Bikes bike sharing demo and took one for a spin. (Read my comments, and more info, in the Momentum article). Not everyone is as optimistic as I am about bike sharing being successful in Vancouver, but I’m hopeful that the City will give it a try. I believe North Vancouver has also discussed the idea, despite its hills — but honestly, Vancouver is almost as steep! Let’s just say we’re more fit on average than a Montrealer? 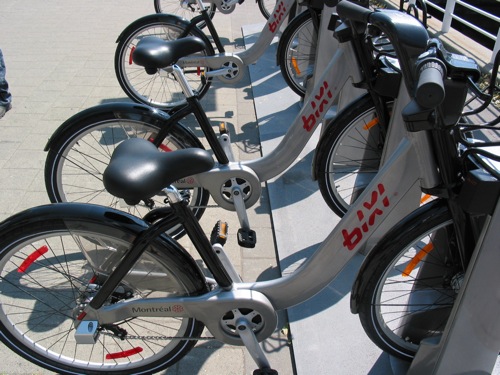 Bike sharing would be fantastic for tourists, as I believe has been reported in Paris and other cities. Getting more cyclists on the street allows for safety in numbers and takes cars off the road, which is good for everybody. The fact that the Bixi system (if we went for that or similar) is mobile rather than fixed in place allows for flexibility; for instance, it could be moved if targeted by vandals in a certain location. In the end, however, I think I’d be happier with more bike routes and secure parking for bicycles since I would then be more inclined to bring along my own bike which, as opposed to the Bixi, is a 27-speed and large enough for my leggy body.

I found myself in the middle of the street again on Friday night, but this time on a bicycle instead of on foot. It was my first Critical Mass cycle, two years after I first encountered them nearly running over my friends and I at Kits park! (That was not the best introduction, albeit amusing to watch.) June is apparently the biggest one (June being Bike Month) and sure enough, there was a massive turnout. I had already biked downtown from my Kits office, and wound up going over Granville Bridge to Kits again, and back across Burrard Bridge after which we zig-zagged through downtown to Lions Gate Bridge. Some cyclists had Billie Jean playing. I loved how we completely buggered up the car traffic. They weren’t impressed with us, and I couldn’t always tell whether honks were in support or frustration, but it was perhaps twice as liberating as Car-Free Day to take over the streets by bike. During the ride I saw a couple Emily Carr alumni/classmates, a former colleague, and several hundred people I’ve never met but enjoyed the company of another rider who distracted me from what would have been discomfort at riding in a tight group. (I’m a novice!) It was freedom to whoop and cheer — together — as we leisurely pedalled around town, or zoomed down Georgia St. Have you ever known this feeling to occur when you’re, say, stuck in traffic? Or just driving down the road? I think not. I left the group after a gathering at the peak of Lions Gate; they apparently went back through downtown to Cambie before thinning out. My adventurous, take-the-most-interesting-path personality kicked in (and I wanted to get home at a reasonable hour for dinner), and I ended up cycling home across the North Shore about 16km. It took me an hour, which is quite decent since the same route takes about an hour by bus! That’s beside the point, however; I did it because I enjoy doing it. If I’d wanted to be home quickly I’d have put it on a bus. (And what sense of accomplishment is there in saying I rode part way?) The ride was really pleasant, and I was surprised at the amount and quality of cycling infrastructure. It’s relatively flat along or near the waterfront, until I got to the hilly portions closer to my house. My only issue was a cramp in my left foot that started earlier in the evening when I was touching the ground with both feet while still on the saddle. (Like I said, I’m a novice.) I like going fast, and the route enabled that most of the way. I was very pleased with myself.

Yesterday, my friend Heather and I met up at Kits Farmer’s Market (I biked from Burrard Station), bought some cherries and cycled past the best beaches (Kits, Jericho, Locarno, Spanish Banks) to UBC Farm. What an amazing view! Unfortunately, the farm was closed to the public but we sat outside the gate and enjoyed some snacks, which included (two) delicious wild berries with a wonderful texture, and some other berry that looks like a small blackberry but tastes more like a grape! Amazing. The view at UBC Farm earlier in June

We took to the trails through Pacific Spirit Park, where Heather was too full to eat more than a couple salmonberries. (I’d had enough the day before after picking for 2 hours.) I am terribly fond of trails and the scent of the place was nostalgic. We came out somewhere in West Point Grey where she showed me, from the top of a hill, a view so broad and far of the Lower Mainland I could hardly believe my eyes.

A short stop at Kits beach included an addictive dip to our knees in the ocean which, at low but rising tide, was enticingly warm, followed by more cherries. Discovering it was 5:30 at this point (four hours after leaving the farmer’s market), we took off with a tad more purpose and finally parted ways just east of Granville Island. (I’d never cycled through Granville Island before, yet I went to school there for four years.) Alone I headed around False Creek to Commercial Drive, across the passerelle I’d been waiting to visit. The view across to the new section on the north side made me wish I’d had time to explore there, but staring at intervals had to suffice. After a Jazz Fest performance by my friend’s band Project at the Libra Room I decided I might be up for cycling all the way home (why get on a bus?) which included the daunting Second Narrows Bridge. Actually, the only daunting part was the massive hills to get there, as the bridge itself was easy despite being blown around a little on the descent. (Alright, I was a bit scared, I admit it!) The last stretch home with the biggest hill I can think of was easier even than Friday. The first time I rode that thing last summer I felt like dying halfway up, so this is indeed progress. A detour through a park and desire to dip my feet in the cold high tide took me home in good spirits. There’s something about arriving home after hours of biking that keeps the energy levels up, whereas an hour on the bus tends to dampen my spirit in comparison. My father basically swears by the bike but I am not quite as eager as him. Nonetheless, I look forward to riding home from the next Critical Mass on July 31st. 6pm at the Vancouver Art Gallery on Georgia… bring your bicycle and your biggest smile!