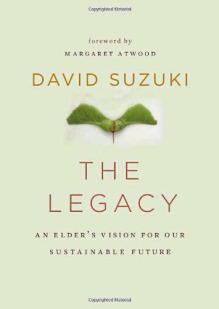 The alternative, if we do nothing to reign our overconsumption back to a place this one planet can sustain, is something to be feared, truthfully. But David isn’t trying to paralyse us, or tell us it’s over and prepare for the worst. He is simply being honest — and his honesty is perhaps never so apparent as in the film produced from the lecture, where we come to understand the man who has fought, lost, and won so many battles. If he and the rest of us stood in fear in the face of adversity and great challenges, we would never see any success.

I challenge you to redefine what “progress” looks like. (My art history instructor called our situation “regress.”) Is it open pit mines, landfills of discarded stuff, and convenience food-like substances? “Progress” implies moving toward something better; progress is therefore leaving our planet and communities to our children in a state better than that in which we found it.

Using up our resources is not “better.” Destroying ancient South American aboriginal cultures and forests to drill for oil consumed in cars a continent away in a polluted suburbia is not “better.” Overworking ourselves in order to pay for those cars and our 52″ TVs and a new whatever every year when the latest one comes out is not “better.”

My positive vision of a better future includes bees pollinating plants on my balcony garden in a transit- and walking-oriented community where I can bike to a farmer’s market, bake bread with local wheat and eat it with local cheese and organic blueberries. I will not own a car but there will be a co-op car if I need it. I can walk to my friend’s house through a park and a greenway where I run into neighbours with dogs and children who have clean air to breathe and no cancer or diabetes. My phone will last several years and be fully recyclable at the end of its life with a company take-back program. It looks a lot like the Greenest City but it’s the new norm, not a utopia. And it’s beautiful.

What’s your positive vision? Has David Suzuki inspired you?

I encourage you to tune in Sunday at 8pm on CBC for some inspiration.

The Legacy: An Elder’s Vision for our Sustainable Future, by David Suzuki, is published by the David Suzuki Foundation and Greystone Books.