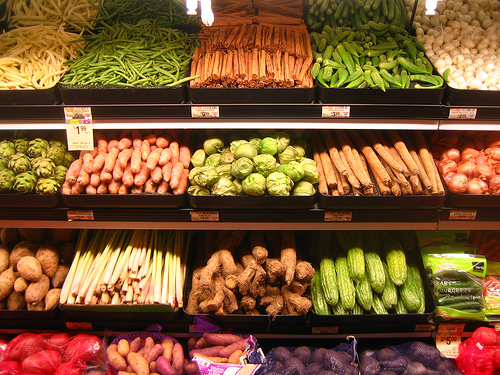 The film interviews interesting people in Europe, Japan and the US who are playing a positive role in creating change. They show and tell us the miserable truth about what happens to the food we grow that doesn’t land on our plates. Here’s some food for thought to start with — some staggering statistics courtesy of the David Suzuki Foundation:

Considering methane is 25 times stronger than carbon dioxide, diverting half of the food we throw out away from landfills would have the same impact on greenhouse gas reduction as taking every second car off the road. Industrial agriculture is so energy-intensive, requiring machinery and petroleum-based fertilizers, that it’s responsible for over one third of the greenhouses gases emitted worldwide.

Along with these losses is all the packaging that goes with the discarded food. Yogurt cups, mesh bags, bottles… Does any of that get retrieved for recycling?

The supermarket can’t predict what will be bought in a day and has to offer variety – oranges, cucumbers, yogurt, bread. (Variety is good, yet they stock very few varieties of fruits and vegetables.) With the need for well-stocked shelves and a constant influx of supply, inevitably what can’t be sold will be tossed, even before its expiry date or before it actually expires. Consumers don’t want to buy products that are about to expire (understandably), and by renewing products quickly on the shelves, the business makes more sales. It’s utterly shocking how much edible food is thrown out from stores because it cannot be sold — and this is after the 30% that never makes it to the shelf.

The industrial agriculture-fed supermarket system has to handle large volumes. By design, it requires uniformity, therefore anything too big or too small, or bendy as it is with cucumbers, gets rejected. (Fast food chains require uniformity as well. Thank McDonald’s for starting it.) It’s all handled, processed and judged by computers, machinery and conveyor belts. (The conveyors are very creepy in the film.)

I like buying fruit that others might pass up because it’s too ripe or a little bruised. I’ll happily eat it — chances are, for the quick shop I’m usually making, I’m going to eat it the same day so I want that ripeness. But we’ve been conditioned to want an unnaturally perfect pear, uniform in shape with its fellow pears, uniform in ripeness. I guess we can afford to be picky, and apparently can’t afford not to. Sure, I don’t want to buy a completely mushy peach with a patch of mould on it, but what’s wrong with slight blemishes? It still tastes good — or it should, but that’s a whole other story.

We undervalue our food

Some food waste comes from buying more than is necessary. Supermarkets entice shoppers with deals, like 2-for-1 or large volumes, that encourage us to buy more than we need, and if it doesn’t keep, it goes to waste. Inexpensive food to which most of us have access — because it’s in bulk, poor quality, or highly subsidized like corn or fast food — offers little incentive to prevent food waste, versus expensive food. My 60-something parents recall growing up in working class in the 50s and 60s, pinching pennies and appreciating every meal. As post-war immigrants, they experienced malnutrition first-hand and still to this day are very careful not to waste food. Canadians discard one in four food items they purchase. I feel so disconnected from this fact because I’ve grown up in a home where wasting food is unacceptable.

Just as there’s a general consensus that wasting food is shameful, I think few people would disgree that ending world hunger is a priority. What I didn’t realise is that our food consumption affects prices not just in Canada (or wherever you live) but globally as well. So when we waste food, we have to buy more, and this consumption drives up prices to the point where the impoverished in Africa — a continent that provides food to Europe — can’t afford to eat. It’s not fair that we waste food in our kitchens and supermarkets with hardly a bat of an eyelash, yet there are plenty of hungry people on the streets of Vancouver who would appreciate every edible morcel. I was saddened to learn that the amount of edible food discarded in North America and Europe would feed the hungry — three times over.

Holy carp! How can I prevent food waste?

I personally never enjoy shopping at a supermarket. I can’t easily find what I’m looking for; I’m distracted by items I don’t need; the layout, wayfinding and labelling are infuriating; and the atmosphere of the store is sterile and uninviting. Store staff can be hard to track down and checkout clerks are sometimes as impersonal as checkout machines. I’ll gladly pay a little more to shop for good, wholesome food at a small place like Choices or the 4th Avenue Whole Foods (formerly Capers) where I feel welcome instead of overwhelmed; where I’ll have a conversation with a clerk or fellow shopper every so often; where I’ll wander around slowly because I’m enjoying myself. And where I don’t feel so disconnected from nature. I’ll pay a little more, but I won’t waste 1 in 4 items.

Take note of how much food you waste — at home, at work and dining out — and see if you can cut it in half. And as much as possible, avoid the supermarket, for until we see systematic changes, it will continue to waste enough food to break your heart.