With my fundraising goal reached, some reflection on daily blogging

When I decided to do a “green” blog challenge as my fundraising pledge, I figured a daily commitment would be easier to stick to than a weekly one because I can’t procrastinate. It has its downsides from a content perspective — lack of time to fully develop arguments with good sources, or to edit properly (I also don’t use spellcheck). But generating a daily post means I get it done without getting caught up in perfectionism or letting ideas become stale. I hope ultimately that, among unexpected duds, my content is better.

It might seem at first like writing about the environment is a constrained topic. I discovered as I branched out, however, that I can write about the environment in the context of design, art, health, technology and film. It goes to show that there are multiple ways of relating to environmental issues, and that the environment really does touch, affect and inspire all aspects of our life, especially culture. When you look at it that way, you can begin to understand how when natural systems are unhealthy and disrupted, we are affected, even if the effects are subtle or appear slowly over the long term. As David Suzuki puts it, “What we do to the environment, we do to ourselves.”

END_OF_DOCUMENT_TOKEN_TO_BE_REPLACED 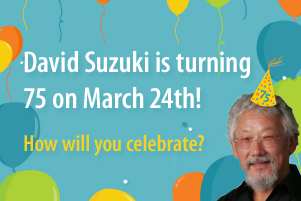 David Suzuki is turning 75 on March 24. To celebrate this momentous occasion and honour his life’s work, the David Suzuki Foundation invites you to make a gift or fundraise online to support the Foundation’s work, and send a personal message to David. There are prizes involved, and those coaxed me into signing up.

But I was at a loss for what pledge to make in return for my friends’ generosity. Jenny has pledged to bike the 60+ km round trip to work and back. Siri has promised to avoid shopping sprees until the big day. It got me thinking about what change for the greener I could make, and it wasn’t easy coming up with something — not because I’m unwilling to make lifestyle changes, but because I’ve made so many that I was struggling to find something new. I know my showers could be shorter and I really ought to shut down my old iMac hog at night. I’ll come around to a permanent commitment to those eventually. I eat four or five bananas a week, my cheese comes wrapped in plastic (I eat a lot of cheese) and I’m kind of addicted to the internet. (Just kind of.) I could change one of those for a little while, no big loss for a little bit of gain. But this isn’t about guilt, it’s about inspiring people and doing something meaningful. First, though, I have to inspire myself.

So I’m going to write a blog post about the environment every day until I reach my fundraising goal of $300. Just look at my sporadic track record: I’m going to need all the moral support I can get!

I may get carpal tunnel, avoid social occasions and frequently skip flossing in order to keep this up — but it’s David’s 75th and I believe very strongly in the work he and his Foundation does.

Will you celebrate with me? Here’s how:

1) Sponsor me online. (Two donors have pledged to match the first $15,000 raised in the campaign, so you’ll essentially be doubling your donation.)

2) Write a birthday message to David.*

3) Look for your personal message to be displayed at HappyBirthdayDavidSuzuki.com within a couple business days of your submission.

I invite you to join me and write your own blog post or comment here about what you’re doing for the environment and why. Or conversely, if you’re not doing anything, why not? I won’t guilt trip you; I’m seeking to understand. Also, if you’d like to request an eco topic about which you’re yearning to know more, leave a comment and I’ll consider it for a future post.

Thank you in advance for supporting the cause that is so very dear to my heart, and valuable to the majority of Canadians.

* It’s easy to donate online at HappyBirthdayDavidSuzuki.com. To send David a message without donating, write to contact@davidsuzuki.org. 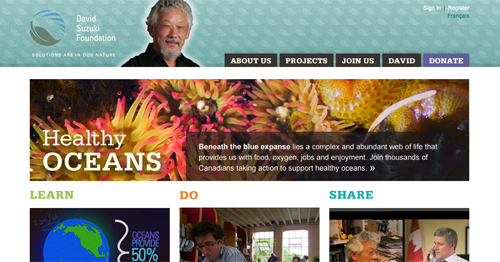 Our team at DSF has been working steadily for months to bring you a new website that lets you — people who care about environmental issues, sustainability, and health — share your ideas, questions, and stories about how we can all make a difference. The site also makes it easy to learn about relevant issues and take action in meaningful ways, big and small.

The design is a significant departure from our old site, which is cluttered and inconsistent. We’ve taken on a new strategy as well: most content is written to fit into either the Learn, Do or Share category, then pulled into project pages where relevant. This allows content to fit into two projects without duplicating pages, gives us flexibility when projects come to an end, and helps you get the freshest content. It’s a more accessible approach than organizing content around our programs, and avoids dividing complex topics like climate change into single issues. Everything is interconnected.

END_OF_DOCUMENT_TOKEN_TO_BE_REPLACED

Does David Suzuki dig your garden?

The third annual David Suzuki Digs My Garden contest is on full steam ahead this year, with the three winning gardeners featured as bloggers on the brand new DMG website. Each week the bloggers—from Richmond, BC, Edmonton, AB, and Ancanster, ON—post blogs and videos, and help answer questions from the public such as, how do I thwart those pesky digging squirrels? or, how do I get rid of dandelions without chemicals? It’s all about being green, too—these gardeners pride themselves on having beautiful foliage without the pesticides.

END_OF_DOCUMENT_TOKEN_TO_BE_REPLACED

“I love it when you talk green to me!”

The David Suzuki Foundation is making green sexy this Valentine’s Day with a series of Valetine e-cards. The one above is my personal favourite, but there are two others to choose from. They’re a little cheeky and should make your significant other, if not your mother, laugh. Save some paper this year and spread a little cheer and love to people who may not normally get a Valentine card from you. Enjoy!