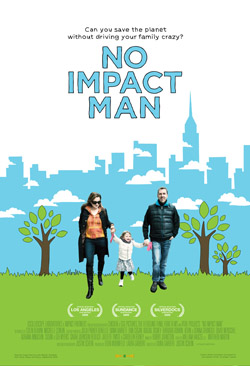 It’s a familiar pattern now: Alisa Smith and James MacKinnon ate locally for a year and wrote a book about it; Jen and Grant went zero-waste for a year, blogged and filmed a documentary about it. If doing either of those things doesn’t seem crazy and transformative enough, Colin Beavan’s family of three did both for a year, and turned off their electricity (for 6 months), self-powered their transportation, went vegetarian and stopped using toilet paper. The project, No Impact Man, is a film, a book and a blog about eliminating one’s personal impact on the environment.

The point of doing something this extreme, he cautioned, was not to suggest that everyone do it, but that everyone can do something. Individual actions, he says, inspire and engage others to act. That’s the power of community, something he says has eroded. It’s also a challenge to us to consider what really is necessary for daily life and what we could do without. As Colin puts it, living with a low impact is about “doing more good than harm.” At the end of their year, Colin’s wife Michelle decided she’d like to keep cycling (something she’d never have considered a year earlier) and not bring back their TV — except on vacation.

Striking to me was Colin’s remark that their healthy, local-only diet reversed Michelle’s pre-diabetic condition. Eventually, she cooked for her family for the first time, although they didn’t explain how the oven was heated and what impact that might have had. She also weaned herself off an espresso addiction. Hopefully her experiences at a farm, a beach and with a worm composter changed her “I don’t like nature” outlook.

Realising that so much of what we do and buy has, at face value, an impact — just breathing, for instance — made me feel a little twinge of pessimism until I remembered that nature comes with natural systems for balancing out things like carbon emissions. (We’re not the only carbon dioxide-emitting species, are we?) That’s what trees and algae do for us, which in science terms is called ecosystem services. But with a four-fold increase in our use of resources in the last 50 years, compared to a doubling of our population in that time, we need to take a long, hard look at what’s necessary to live fulfilling, happy, healthy lives before our planet can no longer keep up.

In Colin and Michelle’s case, ditching their TV proved to have great, positive impacts on their personal lives. Their time spent with friends became more social and interactive (like by playing charades), and it helped them be better parents. Cycling instead of driving improves your health and connection with nature and other people. Gardening in a community plot reinforces your relationship with the earth, its seasons, food, and neighbours.

No Impact Man is one family’s inpired journey to discover what’s necessary and what can be rethought by making different choices. Watch it; I know you’ll be inspired too.