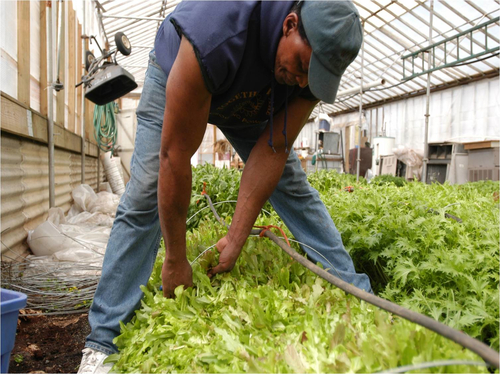 Back-to-back films on agriculture at the World Community Film Festival this afternoon left me uplifted and feeling like change is on the horizon. Dirt! The Movie, Fresh and A Thousand Suns reminded me how many people there are who think like me — including those attending the event — and what amazing impacts these people are making around the world.

One farmer in the US took it upon himself to build a wind farm on his farm as security for survival. (Actually, I think that was part of Dirty Business, a film about coal and energy which followed. I saw four films in 6 hours, so please forgive me if I confuse them.) Will Allen, a former basketball player, returned to his family’s farming roots and started Growing Power, where compost is everything. Joel Salatin is a farming hero, Michael Pollan speaks the truth in terms people can understand, schools are tearing up asphalt for gardens, and rehabilitation programs for inmates are reconnecting people with the land.

Dirt! made me smile and laugh with its charming animations and Vandana Shiva’s infinite smiling. It also made me cry when a woman spoke of the loss of her farmer husband: she went out to the field to find him hanging from a tree. The corporate interference into a 10,000-year-old system has left thousands of farmers in India, and no doubt around the world, impoverished to the point of suicide.

Industrial agriculture, a modern invention, thrives on monoculture. Sprayed by planes, cultivated and processed by machines, then trucked for miles, it’s a system far removed from the traditional practises in the Wodas of the Gamo Highlands in Africa (featured in A Thousand Suns), where their agricultural system has remained unchanged for millennia. It is, however, under threat from Protestant groups attempting to convert them to a religion that separates God from nature — elevates God above nature — whereas for the Gamo people, nature and spirituality were one. I thought the religious discussion was fascinating and surprising. It’s not a perspective I had heard before.

So back to industrial agriculture. “Nature doesn’t like monoculture,” and the system while productive at first will tear the soil apart. It is vulnerable to change and large-scale pest infestations. The point of Dirt! was to illustrate how alive the soil is with organisms, how vital it is to life, and that it can be healed. But treating the soil and the needs of plants as something simple (nitrogen, phosphorus and potassium) has effects as immense in scale as climate change. I was shocked to learn just how far-reaching the effects are: excess nitrogen from fertilization seeps into the groundwater, making its way downriver to the Gulf of Mexico where it causes mass algae blooms that choke out everything but jellyfish and releases greenhouse gases. The excrement from industrial hog farms has a similar toxic effect.

Michael Pollan’s vernacular made strikingly clear the separation we’ve created that causes so many problems. When we remove animals from the farm, he said, we have to artificially fertilize the farm and deal with the concentrated waste produced from those cattle farms. The animals are in such close quarters that antibiotics are required just to keep them alive, and those along with pesticides end up in that toxic pond too. The animals are eating corn — cows cannot digest this; they are supposed to eat grass — as well as remains of other cows and animals (and then we wonder why we get mad cow disease, E. coli, etc.), making them very sick. In India the cow patties are the foundation of soil, and the foundation of houses, instead of hazardous waste contributing to greenhouse gases.

Farmer Joel Salatin, who is also featured in Food Inc., provides wisdom and humour: “Respect the design of nature. Allow the chickens to express their chickenness.” (However you spell that.) His system? Graze the cows. Move the Eggmobile (chickens) over the droppings to pick at the bugs. The soil is fertilized, the grass thrives, and repeat. His system is amazing, and yet it’s such common sense.

Another perspective is human. The social justice movement is deeply tied into the sustainable agriculture movement, even here in BC. Citizens, farm workers and the environment are paying the price of cheap, subsidized food — but we can vote with our forks and demand organic agriculture with fair wages and ethical treatment of workers. Raul, Surrey’s coordinator for Agricultural Workers Alliance, said after the film, “We have to respect the food and the people working for the food. It’s almost like we’re eating the people” because they are suffering and paying the price for our cheap food. Organic food costs more, but it’s worth more and is not the same product, Pollan emphasizes. I loved learning that medium scale organic farms are more productive than large scale industrial farms, cost less, can be more profitable for the farmer. Perhaps the most striking thing is how beautiful they are.

Dirt! made me realise the stories of ordinary people are our greatest asset to disarm the anti-environmental opposition. A former inmate rehabilitated through gardening and planting trees in an urban community said we have to wake up and do something about climate change before it’s too late.

Fresh left me feeling incredibly hopeful that through community efforts, individuals’ necessary changes, family legacies and the collective understanding of what is fundamental to life, we can turn this unhealthy and unsustainable system around and start to feed everyone good, healthy food, create jobs and maintain our precious ecosystems. And the soil itself is an ecosystem, too: the biomass underground is bigger and more important to life than any of us realise.

Just think of what we can accomplish together.