Fragrances not as lovely as they smell 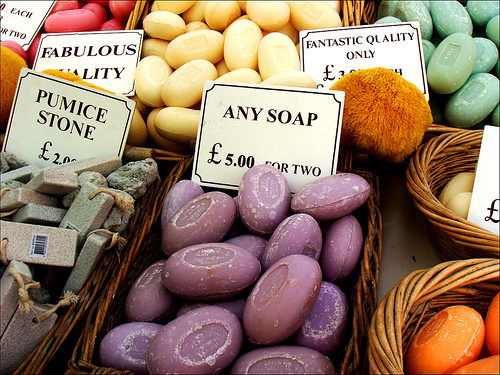 Fragrances lurk in all sorts of consumer products. They can be a toxic chemical soup of ingredients manufacturers aren’t required to disclose. (Photo by Karin Bultje via Flickr)

Yesterday on transit, a woman began applying a hand lotion that, unbeknownst to her, triggered an allergic reaction in the passenger seated next to her. As the doors opened every few minutes, ushering in “fresh” air, I gasped for it, a brief relief from the fragrance from which I could otherwise not escape except by moving elsewhere. It wasn’t that the odour was unpleasant. This isn’t usually my problem. It’s that the chemicals in the fragrance irritate my nose — or brain, rather — in various ways, the worst of which is actually pain. I met a bus driver with the same issue: she spends her workday with a scarf covering her face.

So you can imagine when I walk into a department store where the perfumes invade the doorway that I hold my breath and scamper through as quickly as possible. I’ve done that years, but my reaction has developed in the last year and a half. While it’s unpleasant, it’s probably a good thing because it’s made me aware of the health problems associated with fragrance, also known as parfum, and helps me avoid it. But it’s pretty hard to avoid the scent left on my hands after using a public washroom.

While my understanding is that allergies are related to an unhealthy digestive system, even when mine is functioning well, I still react to even lingering or distant fragrances, like my neighbour’s laundry products. (Please, I’d prefer skunk!) Most of the time, other people can’t actually smell it, while I’m sitting there unable to think of anything except the pain searing through my nasal passages. Unfortunately, that also means many people don’t even realise they’re wearing a fragrance, or that they’ve picked it up off somebody else, via a hug or two for example.

And that is why I’m very pleased that the David Suzuki Foundation has followed up their successful toxic cosmetics campaign with one focused specifically on the ingredient most commonly found in our products. Here’s the problem as described on their action page:

Manufacturers don’t have to tell you everything they put in their fragranced body products. It’s considered a trade secret. Instead, the general term parfum (or sometimes fragrance) will appear on ingredient lists — a loophole in Canada’s ingredient labelling requirements.

Why is this bad? Fragrances can contain a complicated mixture of chemicals. Many are linked to serious health issues, like asthma, allergies, hormone disruption, and migraines. And because fragrance is in nearly everything, it poses a serious, hidden health risk.

This is a health issue as much as it’s a quality of life issue for people who actually react to these toxins. Please send Health Minister Leona Aglukkaq your concerns, and ask her to reflect the needs of all Canadians by making companies disclose all fragrance ingredients. Next, when you buy your products, opt for products without fragrance, like your hand lotions, laundry soap, shampoos, deodorants and aftershave. (Especially aftershave and deodorants, guys!) That is, fragrance and parfum are not on the label. “Fragrance-free” and “unscented” are not guarantees. You can also look for products with essential oils like lavender or peppermint oil as an alternative, or add them to your own homemade products.

Through pressuring our government and making wiser choices at home, we can reduce our toxic chemical exposure and maintain better health. I’m looking forward to breathing easier.