“You are what what you eat eats too” 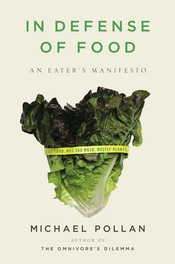 If that title seems confusing at first, the sentiment simply represents the chaotic experience of the modern North American in deciding what to eat.

With thousands of choices at the supermarket, diet advice that changes every year, and a regular barrage of the “latest studies” that turn previous ones on their heads, it’s no wonder we’re looking for simple solutions. From fad diets to the latest incarnation of margarine (50% lower in calories!), what to eat and how much is often up to the discretion of our sources — the most prominent of which have other motives besides your health in mind. And even if you think you know what to eat and are feeling pretty healthy, chances are you can still do better. Michael Pollan, recognising this conundrum, offers seven words that will change your life in the most literal sense: “Eat food. Not too much. Mostly plants.”

In the first two of three parts of his fifth book, In Defense of Food: An Eater’s Manifesto (2008), Pollan illustrates in depth the problems with our food (in the broadest sense possible) and how it is we arrived here. The history is fascinating, and it is that which helps the reader understand why and how we got here, who the key players are and, ultimately, how to go about fixing it. As it turns out, the history goes back a long way.

In the early 19th century, English doctor and chemist William Prout identified the “three principal constituents of food” or macronutrients: protein, fat and carbohydrates. To these three macronutrients, the scientist Pollan calls “the father of modern nutritional science,” Justus von Liebig, added “a couple of minerals … and declared that the mystery of animal nutrition — how food turns into flesh and energy — had been solved” (20). Liebig also “identified the macronutrients in soil (nitrogen, phosphorus and potassium) and “claimed that all that plants need to live and grow are these three chemicals, period” (20). Realising by the early 20th century that something was amiss when humans could not thrive on prescriptions of protein, fat and carbohydrates alone, vitamins came to be discovered, then antioxidants, flavinoids, and so on. This was the beginning of nutritionism.

Science, industry and government began to look at and describe food only in terms of nutrients, and when you understand that “scientists can only study what scientists can see,” the grave problem with this newfound “wisdom” becomes apparent. When nutrients replaced food in popular culture — “saturated fat” instead of “meat” or “Vitamin C” instead of “vegetables” — we handed over Mom’s wisdom and the wisdom of tradition to scientists, food product companies, nutritionists, government and the media. (That’s a lot of people.) It allowed us to start eating what Pollan calls “foodlike substances” instead of real food, because it listed vitamins on the label, or made claims like, “Reduces heart disease.” (That was, indeed, one of the goals.) There was no way for us to know whether there was something we were missing — and in fact, there was, and still is.

The supermarket doesn’t sell food anymore, it sells food products. These, Pollan writes, fool our senses that would normally guide us, with their artificial flavours, imitation ingredients, fake colours, etc. They fail to take into account how different foods interact and how many chemicals are actually necessary in order for us to thrive, a fact which, Pollan admits, is explained in terms of nutritionism. Even having read the book, it’s still hard to escape its grip because we’ve been trained to think through that warped lens. (Did you know that all plants contain antioxidants? It’s not just whichever one happens to be the latest trend (acai berries, goji berries and blueberries come to mind).) These products are mostly composed of highly refined wheat, soy, and corn, so not only is it not very nutritious, we’re eating the same thing over and over again. The environmental impacts of all this are significant.

In part three, “Getting Over Nutritionism,” Pollan weaves together advice with his lessons of modern day eating. Whole grain white bread? Not food. Grain-fed cattle? Not necessarily. A heart-healthy claim? Also not what it seems. His practical tips, written in his usual accessible language, don’t attempt to tell you precisely how to eat, but rather offer guidelines for making the best possible choices — like how to avoid foodlike products. For instance, stick to the outside of the supermarket, and better yet, get out of it completely and visit your local farmer’s market where the food is fresher and therefore more nutritious. Due to the scale of small farms, it’s also likely to be organic even if it’s not certified.

I think you will find what he reveals to us shocking, and that for some, it may be difficult to come to terms with just how much junk we really eat, and the initial challenge it may take to stop eating it. But from personal experience I can tell you it’s worth it, and that there should be no alternative.

It frustrates me that we talk so much about finding a cure for diabetes and cancer and yet talk little of and put even less research into prevention. (Personally I think the research has clearly been done.) Or that we are focused on preventing heart disease but are not reducing incidence. These so-called Western Diseases which, Pollan notes, have become readily accepted in Western society, are prevented if not solved by doing one thing: “stop eating a Western diet.”

But it’s about more than that: eating real, unadulterated food is also about savouring your meal; feeling satisifed; slowing down; reconnecting with nature, your family, and your community; having energy; your money and time (commitment varies but what you do with it counts for a lot); happiness; cultural, physical, and mental health (are you familiar with guilt?); and overall wellbeing.

I feel fantastic and after reading this book, I cannot look at the products on those shelves the same way again. In my family, we ate very little processed food, so I can’t even imagine what effect this information would have on someone consuming it regularly — but I can guarantee that changing their way of eating would have an even greater positive impact on them than it has had on me. For example: “…removing the fat makes it that much harder for your body to absorb the fat-soluble vitamins that are one of the reasons to drink milk in the first place” (154). I drank skim milk for most of my life, thinking it was healthier than the 1% or 2% I drank before, so you can imagine my reaction. (I thought whole cow’s milk was vile, but in the last couple years got used to whole goat’s milk, which is more readily digestible, and I now enjoy pure 36% (cow’s) cream regularly.)

There was a particularly striking part I wanted to quote here, but there are so many I simply can’t find it. But here’s a statistical tidbit for you. After a sharp increase in food prices in the mid-seventies was met with protest, the US government of the day adopted

“an ambitious cheap food policy. Agricultural policies were rewritten to encourage farmers to plant crops like corn, soy, and wheat fencerow to fencerow, and it worked: Since 1980, American farmers have produced an average of 600 more calories per person per day, the price of food has fallen, portion sizes have ballooned, and, predictably, we’re eating a whole lot more, at least 300 more calories a day than we consumed in 1985. What kind of calories? Nearly a quarter of these additional calories come from added sugars (and most of that in the form of high-fructose corn syrup); roughly another quarter from added fat (most of it in the form of soybean oil); 46 percent of them from grains (mostly refined); and the few calories left (8 percent) from fruits and vegetables. The overwhelming majority of the calories Americans have added to their diets since 1985 … supply lots of energy but very little of anything else.

“A diet based on quantity rather than quality has ushered a new creature onto the world stage: the human being who manages to be both overfed and undernourished, two characteristics seldom found in the same body in the long natural history of our species” (121 – 122).

Yikes. That is just one set of many facts that will surprise you and hopefully, as it did for me, quite significantly alter your perception — and mine, to tell you the truth, was not that different from his to begin with. My purchasing decisions are somehow now more simple and more complex all at once, but they have changed and I feel all the better for it. And in case you were still wondering about the title of my post — you’ll just have to read the book to find out.

George Stroumboulopoulos interviewed Pollan on The Hour and gives a good introduction to the book before welcoming him to the show. The behind the scenes footage is hilarious. (Darn, I liked sesame snaps.)

(To write this, I went back to nature, pen, and paper.)