How do you talk about people’s (not so) green habits? 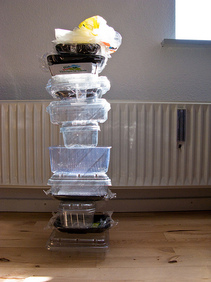 Today I found myself feeling embarrassed that I reacted to a stranger’s not-eco-friendly act with something that, although gentle, ultimately got me nowhere because it got her back up. Despite my best attempts to be casual and compromise a little, I still made her feel like she’d done something wrong. It’s possible she didn’t know any better, or, I conceded to her, that she may not have the resources in her community. But I think I would have been better off asking, “You don’t have any recycling or donation facilities nearby, or none of your stuff was salvageable that way? That’s too bad!” Maybe it still would have come off as a criticism but at least it may have been more directed at her town instead of at her. Nobody likes to be questioned that way, and I always feel terrible if I think I’ve hurt someone else’s feelings.

It’s a sticky thing, having conversations that essentially challenge the way others live, whether it’s your own sister (I’ve failed pretty miserably at that), a friend, or a complete stranger. I’ve felt bad after casually saying, “No fat yogurt? That’s no fun!” to a friend, and it’s really hard to approach people about their synthetic fragrances because they’ll take that very personally.

Engaging people who are already in the green camp or living with healthy habits is relatively easy. Coming at people cold turkey will get the barn door shut on you. I’ve become curious lately, however, about what people’s motivations, values and concerns are if they’re not living in a more sustainable way. Maybe asking, “why did you do [x]” is a non-threatening way to both understand people and help them think about alternatives…. but I’m not sure.

I remember my brother-in-law telling me about hormones in conventional milk, and my sister saying I should stop using sugar in my tea. Most of my life I heard, “wear your hair down, cut your hair.” It took me years to come around, but I did. In all those cases, I finally acknowledged that changing was going to be a good thing for me. Living sustainably also comes with personal gains — getting fit from cycling, preventing cancer and saving money, for instance — but in cases where it doesn’t, how do you encourage someone to change themselves for the sake of orca whales, children in another country, or halting climate change? What if they don’t yet see the connection between our actions and the health of the environment?

Do you have experience trying to have a conversation like this with someone, or have you been criticized about your habits yourself? How did you/they react? Did either of you succeed in resisting or breaking resistance to change?

Tweet
Posted at 10:15pm. Tags: dialogue, environment, green, sustainability
NEXT Kick the pavement: cities are for people
PREVIOUS Why I’m an environmentalist and what that means