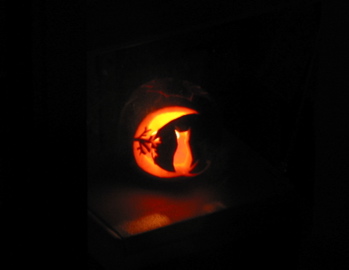 This is my first Halloween without the decorating and door-answering I did at home. I just realised I miss the “rigging the door” thing I used to do, where I’d tape one end of a thread to the door, loop the thread through (and I perfected the method) a pipe cleaner attached to the ceiling, and onto my Einstein Ghost (tissue with feather on its head), that had a penny or two inside to weigh it down. So every time you’d open the door, down would come a ghost! Too bad it wasn’t bigger… hmm… maybe in the future 🙂

And maybe next year I won’t be so busy and I can go back to mom & dad’s for the spookfest… but the last couple years have been so quiet! Now that I no longer live there, and children in the family have their own neighbourhoods to haunt, it’s time to move on. However… I still carved a jack-o-latern!

I realised when I held it up to the windowsill before carving that the windowsill is much, much bigger than I had remembered. So I could have gotten a much bigger pumpkin… oh well. I guess it was all I could really carry, anyway! Plus it will be quite enough to make pumpkin bread. Yum. (I got an organic pie pumpkin, so it’s non-toxic.)

I can smell it burning from the tea candle… smells kind of nice, actually! 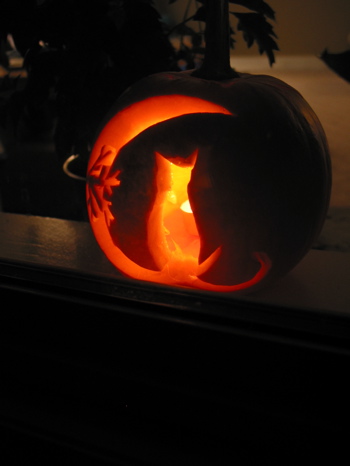 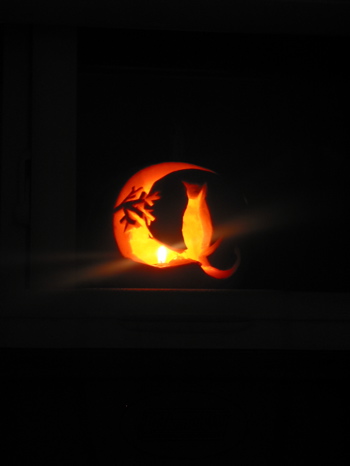