Saying goodbye to a house 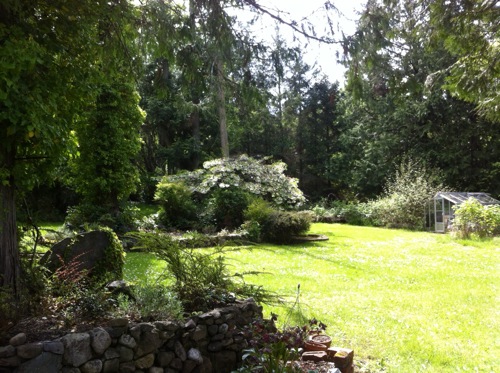 My family enjoyed one last traditional breakfast at the house in North Saanich and said goodbye. After at least 15 years in the family, the house first owned by my late grandmother has been sold. I felt at odds with reality — we’ll come back here in the summer and eat breakfast in the dining room and lunch in the yard, right? I had trouble believing that this meal we gathered for in this room, with the round, dark wood table with the blue fabric-backed chairs and tiffany lamp overhead, smelling a certain way and most definitely feeling a certain way, would be our last. I was more in tune with that feeling than ever.

I have a lot of memories attached to that house, and they all have something to do with people, with my family. As I walked around the yard — roughly in the center is an ornamental cherry full of white blooms, standing over a neglected pond — I remembered in particular last summer. We picked blackberries in the corner, more than we could eat in a day. I admired the spot where my partner at the time and I camped out, and remembered fondly how his stirring in the night frightened a deer I knew was there, sending it galloping off. (No doubt it was enjoying the blackberries, too.) I imagined the garden furniture out, eating Greek food in the sunshine.

I thought about my cousins and godparents and friends who’ve been there for photographs, meals and bike rides. I reminisced about playing piano — the keys had so much resistance that my grandmother, being used to this, would play my family’s other piano as if for a concert hall. One night, we looked at the stars together from the deck; it was the first time I saw the Milky Way. And now I’m shaking my head at the long-ago car accident that happened somewhat comically after my aunt, having gone inside with the cream puffs (very important), left me alone in the car, trying to get out the stuck passenger door. I realised it was rolling backwards down the steep hill, its brakes having failed to restrain it. I jumped out the driver side door and watched it head down the hill, cross the street, and slam into an absent neighbour’s Corvette. (Or something.) The Honda won.

I think the hardest part of saying goodbye to the house was knowing I wouldn’t feel it again. I took a good look around, absorbing how it looks, and I can see it again in photographs all I like. But being there is something else, and I don’t think I ever fully acknowledged it before. I always enjoyed arriving there — it’s quiet, it’s different from home, it’s usually drier and it has its own scent — but knowing I’d have to bid farewell made me very aware of its qualities. It’s hard to let go.

So long, house. Thanks for the memories. May the new owner take very good care of you.