7 reasons why buying local is better (year round) 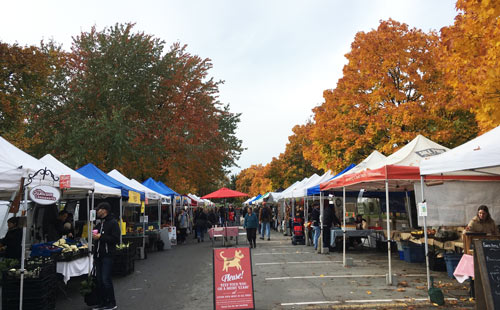 As Cyber Monday and the Black Friday weekend chaos comes to a close, I’m reflecting on a weekend where I practiced Buy Nothing Day on Friday, and bought things only from local makers and small businesses since then. My year-round preference is to shop local, but I’m writing about this now because it’s the start of BC Buy Local week.

As you plan your holiday shopping — or any shopping — keep local businesses top of mind. Here’s why:

2) Supporting local businesses also translates into more jobs for locals. In fact, “a 1% increase in BC consumer spending creates 3100 jobs and $94 million in annual wages to BC workers” (LOCO BC). Those wages in turn recirculate if spent locally.

3) Supporting local businesses supports a network: local businesses tend to buy from other locals, including producers, services providers and credit unions/banks. According to LOCO, local businesses also give five times more per dollar of revenue to charities in their communities.

4) Local businesses are more personal. As a repeat customer at several local shops, the owners and staff know my preferences, buying history and sometimes my name — and I know theirs. (“How was your trip?” asked Maria who co-owns the deli, several days after I told her about weekend plans.) The relationship makes shopping there a pleasant experience, in addition to the more relaxed atmosphere. This is one way of building a vibrant and trusting community.

5) Belonging and pride of place are enhanced when a neighbourhood has the conviviality of public life. Local businesses are a great way to meet other locals and newcomers and build social connection. They also contribute to a more meaningful experience outside…

6) Local small businesses contribute to a vibrant streetscape. Architect Jan Gehl, interviewed in Charles Montgomery’s Happy City, says: “… what attracts people to stop and linger and look, will invariably be other people. Activity in human life is the greatest attraction in cities. … If you make more space for people, you get more people and of course then you get public life” (pp150-151). And Montgomery writes that “studies of seniors living in Montreal found that elderly people who lived on blocks that had front porches and stoops actually had stronger legs and hands than those living on more barren blocks.” The latter could include streets with big-box stores. “Meanwhile, those who could actually walk to shops and services were more likely to volunteer, visit other people, and stay active” (163). I can’t think of a better reason to make sure we keep small businesses healthy.

7) Local businesses offer another great social advantage: meeting the makers. Farmers markets and craft fairs are great examples of this, but there are others with brick-and-mortar shops such as Melk art & design on Clark Dr., which I visited during the East Side Culture Crawl, and Under the Umbrella on Lonsdale Ave. where the makers take turns tending the co-operative shop. This offers opportunities to hear the story behind objects and learn where materials come from. (The handle on my razor is made from cherry wood found in West Vancouver.) And there are plenty of places to find higher-quality and sustainably-made goods among the locally-run shops. My client Second Nature Home Boutique stocks plenty of goods by local makers year-round.

If you’re a local business owner or employee, join me at LOCO BC’s next monthly mixer, Tuesday December 6th on Granville Island.

What if our economic system was modelled after natural systems? What if business operated collaboratively instead of competitively? What if companies’ shareholders and beneficiaries were their own community?

Most of us live in a broken system where the distribution of monetary wealth is becoming increasingly top-heavy, and the consequences of this push down and exploit the people at the bottom of the ladder instead of uplifting everyone. But there are entrepreneurs around the globe working with a different set of values and a different idea of what wealth means. Named after this alternative vision, A New Economy is a heavily-researched film from director Trevor Meier looking at democratic, cooperative and equality-driven ventures in various cities, mainly in Canada. It asks: “What if working together for the good of all was the most common business model?” The team pored over hundreds of case studies and whittled them down to seven inspiring social innovators for this film, including Vancouver’s own Sole Food farms, where employee and interviewee Lyle speaks with heartbreaking candour. Profiled ventures also include a cooperative brewery, an innovative independent hotel, and an open-source tech company.

David Suzuki pointed out that the economy is a human invention that we anthropomorphise and worship. It becomes the centre of everything at the expense of not only our planet but our people. It’s not sustainable (endless growth is not possible on a finite planet), and is given higher importance than what we truly value or need: family, friends, food, clean air and water, culture, community. The new economy innovators turn this on its head for a sustainable, human-centred approach.

Another approach not explored in this film is the gift economy. I recently listened to a very inspiring Permaculture Podcast interview with permaculturist Ethan Hughes in which he talks about this alternative form of sharing and spreading wealth. It’s well worth your time.

Ticket proceeds from the first film screening were donated to Sole Food — $2,742.90 that stays in the local economy and helps 35 people to keep making a big difference in a small city.

A New Economy screens again Tuesday, November 15th at the Rio Theatre in Vancouver. Get your $10 ticket quickly — the first one sold out! Not in Vancouver? Check out their other screenings or host your own. See also this review and interview from The Georgia Straight.

Are you a Radical Doer?

Last summer I joined the 2015 RADIUS Fellows and other social entrepreneurs on a train tour to meet like-minded changemakers in Seattle and Portland. Through that event and (quite awesome) RADIUS events prior to that, I learned about what other passionate and forward-thinking entrepreneurs are building in Vancouver and the Pacific Northwest. I can only begin to imagine what the Fellowship is like after spending three days with amazing, interesting and friendly people — from Vancouver and elsewhere in BC — on the tour.

RADIUS SFU is now accepting applications for the 2016 Fellowship through January 28th:

“Once a year, the RADIUS Fellows program opens applications to bring together a cohort of emerging Radical Doers from the SFU community and the Lower Mainland. We are looking for the next generation of untamed social entrepreneurs and innovators who are early on their changemaking journey, demonstrating remarkable accomplishment and a relentless dedication to creating positive, sustainable impact in all they do.”

Does this sound like you or someone you know? Apply or find out more today!