organized sport on the field surprises me

people gather on one side, cones spread out

if it’s in a pattern, I cannot tell

the other side, the domain of seagulls

they own the place when we aren’t looking

I once watched them in ceremony

together, a hive mind, they tore into flight

circling the field — a different field

one that enjoys more organized sport

— and together descended to alight in a sort of circle

from which they marched outward,

each individual making its own bobbing path

all this from the window of a bus

if anyone else notices

Where do your eggs come from? 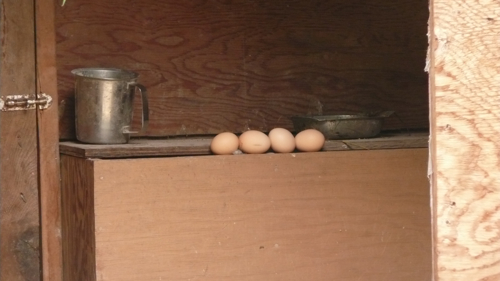 Eggs at a family farm in Pemberton, BC

The sled dog mass killing in Whistler recently has sparked outrage, leading to some much-needed discussion about the unethical treatment and slaughter of animals that we tend to ignore: factory farm animals and grizzly bears. After a cat was thrown in a garbage can, fuelling world-wide fury, a question was posed whether food animals are “victims of their poor image”. Considering dogs and cats appear to get all the attention, I’d have to agree.

I wrote the following text almost three years ago for an Environmental Ethics essay, but I was already beyond the word limit and didn’t include it. You can probably expect to hear more about factory farming from me as this series continues (unless you help me reach my $300 fundraising goal!). Later, I’ll dig up and add some more information that came to light well after this was written.

The deplorable conditions in which hens and “broiler chickens” are kept are becoming known to the public. Canada’s egg industry relies, as does its pork industry, on “the extreme confinement of animals to the point of virtual immobilization — in the name of efficiency” (Youngman). Of the country’s 26 million laying hens, 98 per cent are confined in wire-mesh “battery cages” of four or more birds each, cages so small they cannot even flap or spread their wings. By the time the hen is considered unproductive, “she is often bald from feather-pecking and the constant grinding of her body against the wire mesh and other birds” (Youngman) and her entire body is in terrible condition. Battery cages are, of course, unnecessary for egg production. “They are used because they allow eggs to be produced under factory-like conditions, thus lowering the market price of the eggs. The chicken’s living conditions subsidize the true cost of the eggs you eat (Vancouver Humane Society).

END_OF_DOCUMENT_TOKEN_TO_BE_REPLACED

Yesterday The Visitor returned for tea, uninvited. Lumbering across the lawn, he (or she) found a comfy spot and settled down onto the mossy grass and laurel hedge cuttings. Stretched out like a bear rug, he lay there panting, only looking up to see what the passing cars or people were on about. I agreed, it was a hot afternoon. 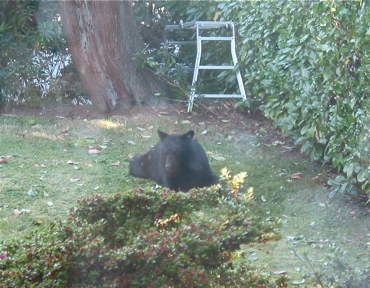 And so he lounged there awhile, would find a different spot every so often, roll over and roll back. Sometimes he would stretch out until his hind legs were straight and his front legs casually bent in front of him, supporting a sleepy head. “I’m so full… so sleepy.” One could say, I suppose, that he was having a siesta.

END_OF_DOCUMENT_TOKEN_TO_BE_REPLACED 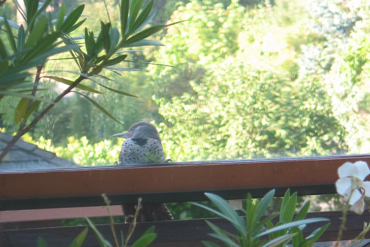 END_OF_DOCUMENT_TOKEN_TO_BE_REPLACED

If you read that title and started to back away, don’t fret: animal welfare isn’t synonymous with PETA or extremism. It’s about the ethical treatment of animals — raising, feeding, caring and, in certain cases, killing them in ways that prevent (or minimize, if unavoidable) their suffering and maintain their natural needs and environment. That’s my extended definition/interpretation, anyway, via my readings and class discussions in my Environmental Ethics course.

Through this Plenty Magazine article about hens, eggs, nutrition and welfare, I got to this (A) Brief Guide to Egg Carton Labels and Their Relevance to Animal Welfare. The facts are striking. Mind that this is an American site so some labels we see in Canada aren’t listed, and others listed aren’t seen in Canada. I guess. I’ve seen “free run” and thought it to be different from “free range,” and perhaps it isn’t, but no answers are provided on that page.

END_OF_DOCUMENT_TOKEN_TO_BE_REPLACED

Whiskers under the sea

I think I just named this little fellow. He or she is a peppered cory catfish. They’re quite pretty and move sort of gracefully. Incredibly cute! I’ve been converted to a fan of pet fish… anyway, here’s one of our newest additions to our 55 gallon aquarium. Photo by my boyfriend, the fish enthusiast! 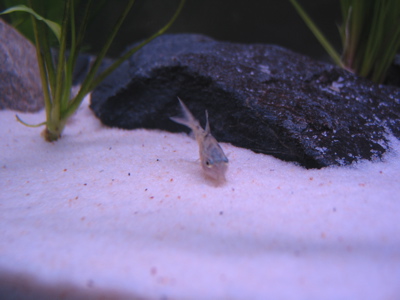 We have babies! Fish babies, that is…

We have 3 zebra danios and determined that at least one of them is female, and that one is carrying eggs.

Something as tiny as a fry is difficult to photograph, but my boyfriend captured this one that I then zoomed in on and added an arrow to point out the little critter. We have 7 or 8. Unfortunately when he discovered the hatchlings’ presence, he was doing a partial water change of the tank and siphoned one into the bucket. It then went down the drain… oops. He says by morning we’ll have 50 more. We thought the eggs would be eaten before they could hatch but apparently not, so the two of us are rather excited. 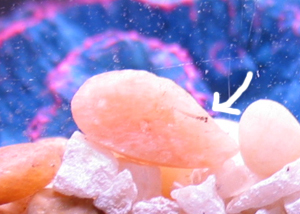 We recently acquired some fish and all the trimmings. Last week Wednesday we visited the Vancouver Aquarium as neither of us had been there in quite some years. I took a ton of photos (135 to be precise), with some intended for desktop wallpaper and artistic endeavours. 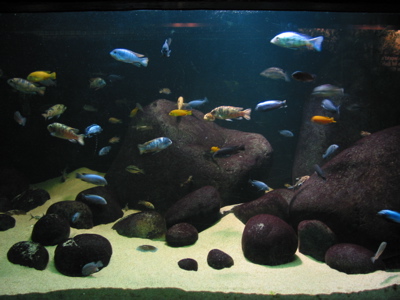 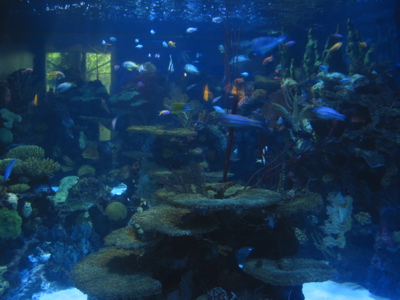 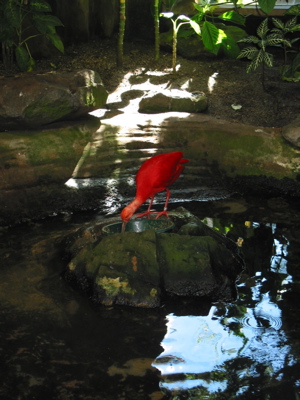 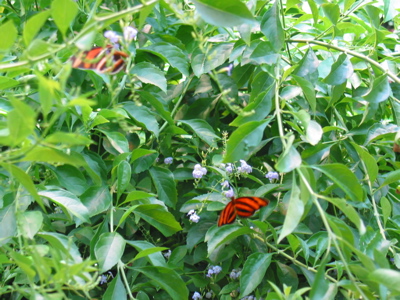 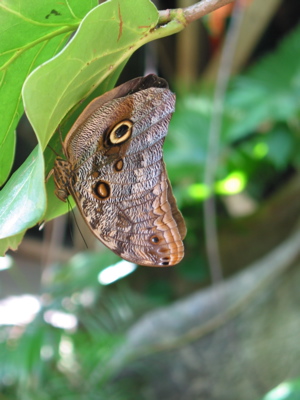 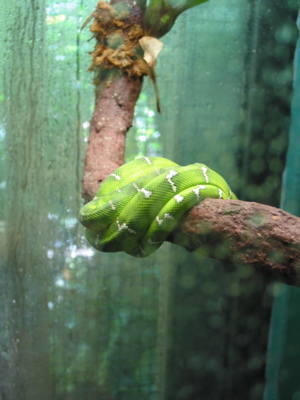 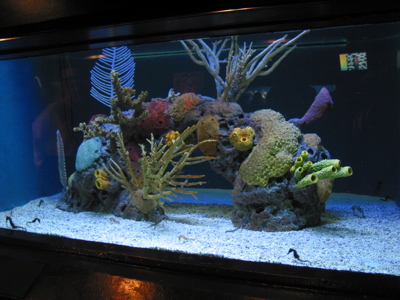 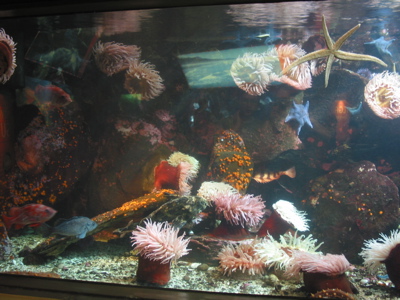 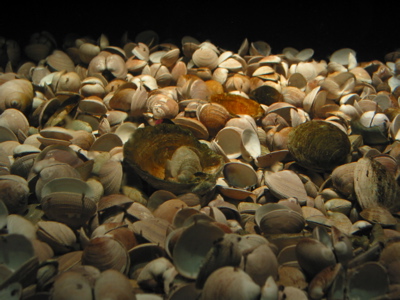 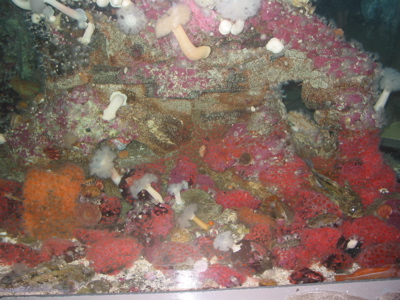 Flash, no flash. What a difference in depth! 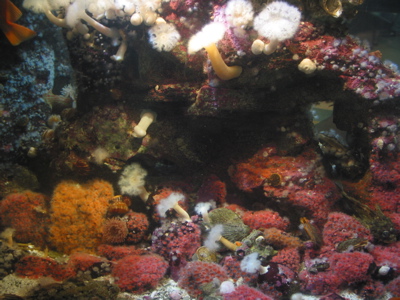 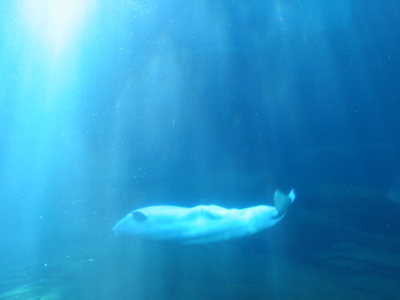 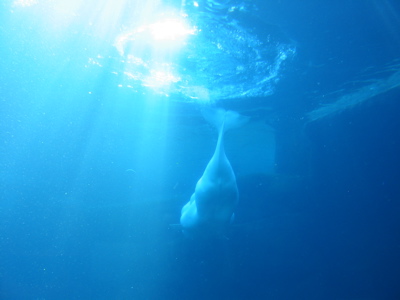 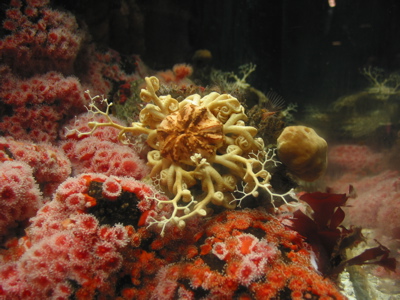 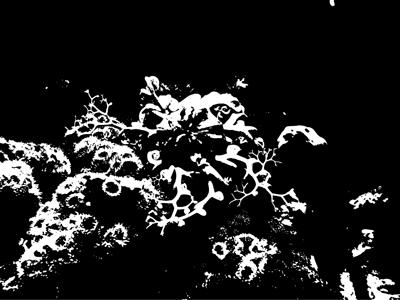 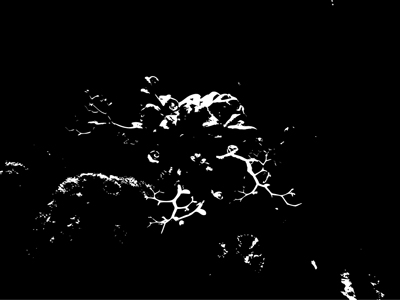 Photo in the News: Cat Chases Bear Up Tree

that is the headline for this curious and unusual story about a very territorial cat.

i recently saw a real liger… but have you ever heard of a “pizzly”?

story with photo at news.nationalgeographic.com