I loved this film so much, I attended both of its Vancouver screenings last year (and I wasn’t the only repeat viewer). If you missed it last May or last fall, you have two opportunities (to see it twice, even!), next weekend at the Projecting Change Film Festival. There’s a great lineup of films on social and environmental change, so go check it out. Also, look for the festival coupon in your Green Zebra coupon book.

Now here’s your round-up from around the web

Jamaican students figured out how to make a biodegradable plastic from fish scales, a natural source that is thrown out on a daily basis without second thought. With so much garbage in the ocean and not enough fish, what if we paid fishermen to catch plastic trash?

Climate change will make water shortages worse — and probably give Vancouver more rain in our wetter season. (If you didn’t notice how much it rained from November to May here, you live under a rock. Unusually wet May, third coldest April on record, etc.) We’ll witness desert communities become unlivable when they can no longer water their people let alone their lawns and golf courses. Unfortunately, I’m not too fond of this idea for producing more drinking water via desalination of ocean water. 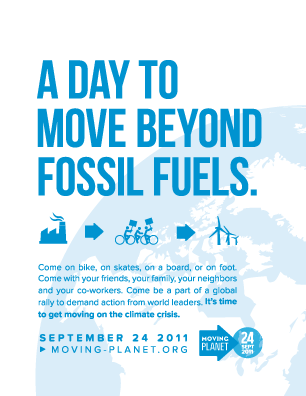 Texas thinks economic stimulus in the form of wealthy peoples’ car racing is more important than educating its citizens. Teachers disagree. Speaking of taxpayer dollars going disproportionately into deeper pockets, Canadian and American governments are subsidizing Big Oil with billions per year. That’s just not right. On September 24th, join supporters of 350.org and stand up for solutions to climate change and alternatives to fossil fuels. Think the October 24, 2009 Day of Action but bigger.

Maybe we should think about driving less?

Writes Michael J. Graetz in the L.A. Times, “The United States has 4% of the world’s population, but we consume 25% of the world’s oil. … automobile fuel efficiency standards have reduced somewhat U.S. oil consumption, but in an unnecessarily costly manner, and they do nothing to reduce the miles we drive. Economists have estimated that a gasoline tax of just 25 cents a gallon would have saved as much oil as these fuel efficiency standards at one-third the cost to the economy.” According to Environics research, the majority of Canadians polled about their support for a carbon tax in their province supported the idea, with British Columbians also supporting in the majority the carbon tax the province instituted a few years ago. This support is maintained despite rising costs at the pump.

BC Busines asks: is it time to start paying user tolls for road usage?

Greenpeace ranked the energy demands of data centres, so next time you’re thinking about with whom you should cloud compute, or whether you ought to at all, consider this list, and badger your poor-performing favourites to get better. (Sorry, Apple. You’re doing well in other ways.)

This $*&% is bananas and its footprint is…

Speaking of fruit, I eat bananas and cocoa with a certain amount of guilt. But if I’m grocery shopping on my own, I won’t buy anything that can be grown here when it’s out of season. A new book, How Bad Are Bananas measures the carbon footprint of everything. Might I point out that according to a booklet I acquired from Coast Paper, air freight is the worst offender, and trains are pretty much your best bet for bulk. I hope my raw milk cheese from Quebec arrives here on a train. It makes me envy my sister who only has a short drive to get fresh raw cheddar from a biodynamic farm. It’s too bad the roads there aren’t safe for cyclists — or pheasants, for that matter!

Found one for not just cyclists: De-Growth Vancouver conference, June 3 – 4

Tweet
Posted at 10:18pm. Tags: climate change, energy, films, garbage, oil, plastic, vancouver, waste
NEXT David Suzuki’s Queen of Green gets a facelift — the brand, that is
PREVIOUS Stand up for democracy. Vote on May 2nd!