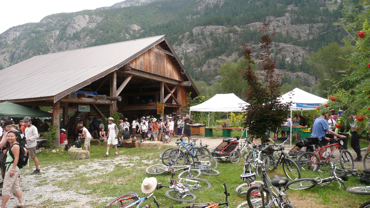 Yesterday I attended my first Slow Food Cycle Sunday, in Pemberton. Whew, what a ride!

We arrived in Pemberton Village rather on time considering the road construction on the Sea to Sky Highway. (No rockslides, thankfully!) Treacherous road, but man, what a view! The parking lot at Signal Hill Elementary School was rapidly filling up when we unloaded our stuff, packed up our saddle bags and took off in the direction of the Community Centre which would be our official starting point. It was obvious then that there was a huge turnout, and in fact the count thus far exceeds 2000 riders! It was mildly sunny and cool, but the weather didn’t do what was forecasted. It did the exact opposite, without the potential thunderstorm that seemed imminent. 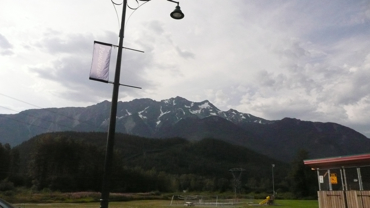 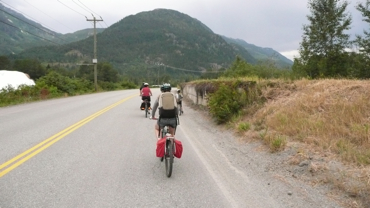 Rain started to sprinkle as we set off from the Community Centre by 10:00, and it soon became gloomy and breezy. Dad regretted not bringing his waterproof footwear but come noon hour, as we rolled into Helmer’s Organic Farm for lunch, the sun made a permanent appearance at full force. We nearly missed this destination as the sign had fallen, but upon entering we were told it was “the best one” — no doubt about that! An array of food tables, fresh produce and some merchandise greeted us within the crowd of people. We sampled some delicious raw foods treats then enjoyed one of their lunch offerings. I didn’t quite know what it was but it was delicious. A chilled cheeseless cheesecake with strawberry sauce refreshed us in the heat. I savoured most of my super-sweet banana/date/honey bread on the drive home as I wanted to relish the cheesecake for awhile. 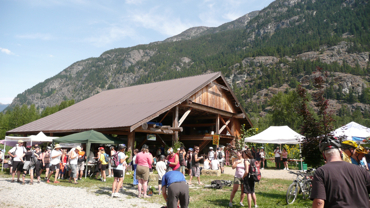 The property itself was lovely, with a beautiful log cabin and a dreamy little backyard with trees, grass and a garden. This photo Dad took wasn’t at the angle I would have chosen — he’s more interested in architecture than romantic places to read in the shade, of course — but this gives you the idea (left side of image). Their product labels and branding are just as pretty. 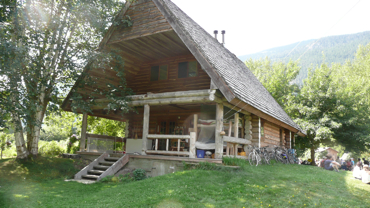 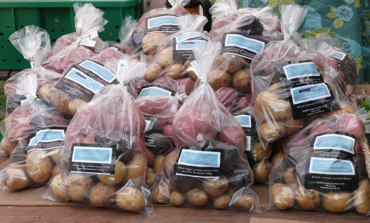 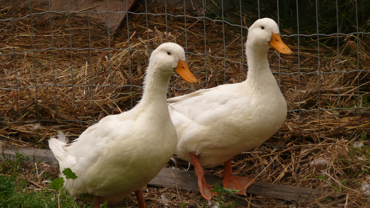 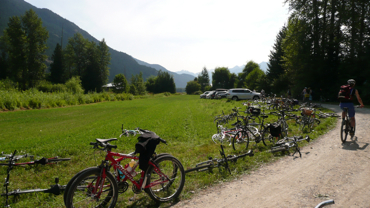 The next stop we made was for fries, “straight from the field” (root cellar, actually) and very tasty. It doesn’t get fresher than that. The last stop was a kilometer down a surprisingly bumpy road up/down which I was not sure I wanted to venture, but I made it almost intact and had a good rest. I was grateful for a woodsy ride by the river as it was cool. When we arrived it was kind of a party atmosphere, with people lounging everywhere and a “labyrinth” of bikes strewn on the lawn. (To my benefit the lawn was full of mosquito bite-relieving plantain!) 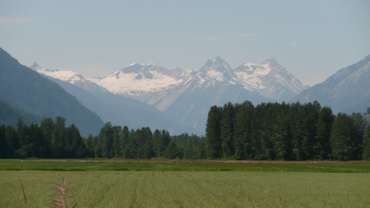 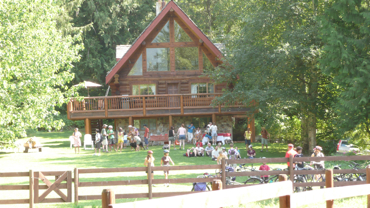 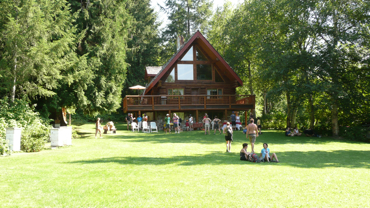 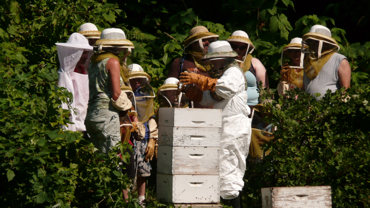 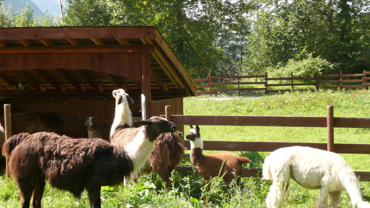 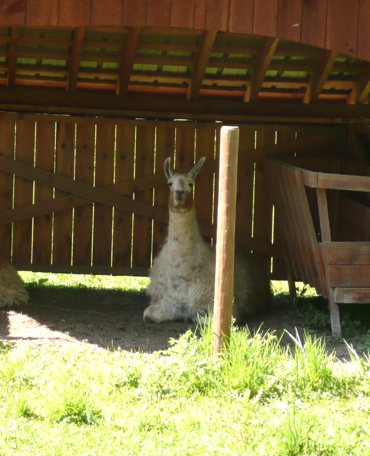 Who wouldn’t love a face like that? Too cute. Their fibres are woven into soft cloth, particularly alpaca wool, which was being spun on-site by an Austrian-Canadian woman who had gorgeous wintry accessories for sale. I did not want to think about warm clothing!

Having completed the 26 kilometers to arrive, we set on back again. I had previously switched from the old knee-killing mountain bike to Dad’s Bionx-assisted bike, but the rough roads necessitated a low-seated mountain bike that got me back again with only a small, exciting toss off the path. The way in was not so fun, on the other hand, with my sunglasses nearly bounced off my face! So once again a happy biker, we went out into the sweltering afternoon sun. We later came upon a scene so picturesque I demanded a photo that might just end up on a calendar. Cheesy! 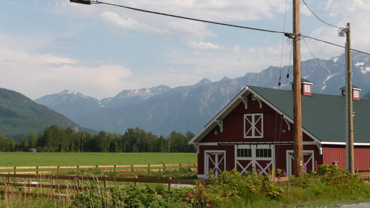 We stopped for sandwiches off the road near a river (Ryan River, I think?) that meandered close to the road at that point. The breeze in that section was lovely but it would end and we would be greeted with intense heat and hot wind for the rest of the journey, roughly 7 km. Doing a fun 25 kmph on the assisted road bike seemed to cool while allowing poor Dad, suffering on the chunky mountain bike, to seek relief in my tailwinds. Being able to straighten my legs out on that bike made such a difference as I was ready to die on the mountain bike. Riding it 7 days straight must have exacerbated my problems as I was sore the moment I got on, and persisted a long time with frequent stops. But, ahh, we did it!

A girl going a pretty good clip told me last year’s was way better, with more farms open and various shops. We skipped most of them (no use for coffee, iced tea, or ice cream sandwiches) and I was a little disappointed, but I became so obsessed and even addicted to the bike ride portion it almost didn’t matter. In fact I didn’t even have an appetite, having eaten 2 boiled eggs and a large bowl of cereal for breakfast. Guess I forgot the trip was all about eating! Also disappointedly we only brought home two bags of potatoes and that was it, but Pemberton is known for its organic potatoes. We had enough weight to carry as it was! 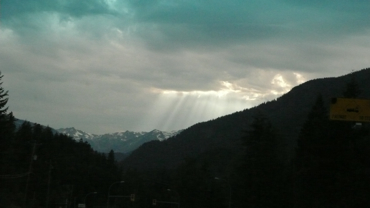 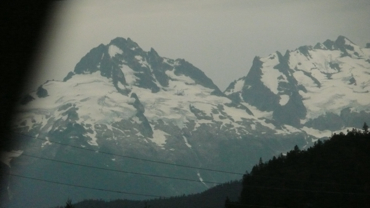 While it took roughly 5 hours to get to the end of the route, it took only 2 hours to get back as we stopped only for lunch. Our van was essentially alone in the parking lot when we got back! We left at ten minutes to six and hit pockets of pelting rain on the way back. We left the highway for a brief drive through Whistler, which I knew wouldn’t be too fulfilling because it’s much better by foot, but it gave me a taste of a beautiful, Bavarian-feeling village and I’m keen to go back. The decision to plow home for dinner (stir fry beckoned, but it was actually going to be sushi) was wise as we hit massive traffic congestion on our approach to Squamish. Terribly boring and luckily we had food, but there’s barely any radio reception up there so I took to people-watching until it became single lane traffic. We literally would have been biking faster. It took us exactly twice as long to get home (4 hours, 20 minutes) as it did to get to Pemberton, which is very sad and I hope the government isn’t making it bad on purpose so we support their highway expansion. We believed much of the problem was simply a string of traffic lights that, with volume, created an excruciatingly long backup. We must have crawled at 5 to 25 kmph for an hour and a half. To put the entire trip into perspective, in the same time we could have driven from Vancouver to Kamloops!

We had planned to stop here for a photo and to fish out the trail mix, but we crawled by instead: 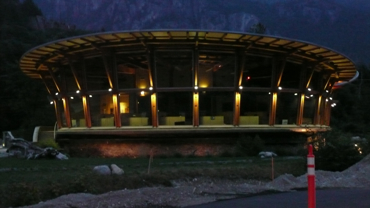 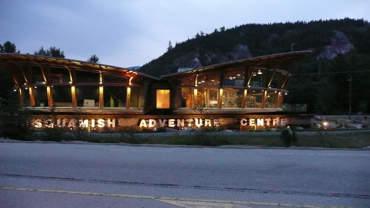 Overall an enjoyable trip that I would love to make next year, Sunday, August 16th. And will actually think about photographing the food, not just (slowly) devouring it! Granted I’ll certainly need a comfier bike. Many thanks to the organizers, volunteers and participants for making it a great event that I hope will be even bigger next year! I’ll be ready. Will you? 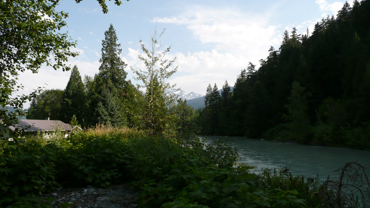 Thanks to Dad for taking most of these photos, and many more!