The Urge to Purge / A History of Drawing 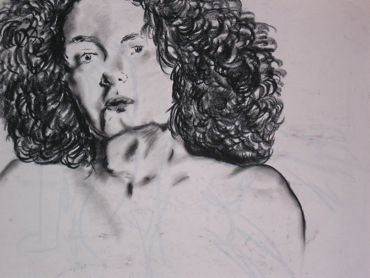 Before writing this post it occurred to me that I may not have the kind of readership that would be interested in a post like this. I’m of course aware that blog readership evolves on a mutual network, but I realised that almost all the blogs I read are on sustainability, climate change, transportation, and green lifestyles. So it became apparent, when I still had the desire to write about it, that I just love to write! While a month’s absence from blogging doesn’t appear to correlate, I think I just needed the equation time + something to get excited about = passion –> creativity. Well, it must have hit a backlog because now I have a couple on a waitlist here waiting to be written! (While I think of it, I should mention that Monday lunch blog posts fizzled in the last few weeks because I haven’t been working.) In this post I anticipate some of you will find issues and feelings to which you can relate. If you’ve grown up, moved out, and even moved back in, you’ll understand!

So anyway, my recent move back to my parents’ house prompted a purge of not only what I brought with me, but also what I left behind. Going from roughly 1,000 square feet (shared) down to a personal space of less than 200 meant I couldn’t keep everything; moreover, I didn’t want to. Some of my belongings are in storage — mostly kitchen furnishings — but much of it required a re-amalgamation of bedroom + office + living room into just a bedroom. Letting go of stuff can be challenging and even emotionally difficult. After a month — it was June 21st that I started moving in, and time has flown by — there remains some items to address but I’ve made good progress. The first half was the most entertaining.

A shelf in my closet was stuffed with school projects, stories, drawings, letters, and “diary entries” from about grade two through grade 12. As you can imagine the early stuff — comics, writings, drawings — is heartwarming and occasionally funny. My portfolio of drawings from which I could only purge a single page takes the cake as far as the first half of my life goes. But it was at the blossoming young age of 12 to 13 that really tickled my funnybone. Some of my accounts read like a young Brigitte Jones’s Diary, of a child of the 90s: an encounter with a crush; an exciting TV appearance by a band-who-shall-remain-nameless about which I was obsessed for a few years; tracklistings of mix tapes and Top 20 singles (a who’s who of late 90s one hit wonders!); an account of my first concert, and some super, super cheesy lyrics I probably thought were awesome at the time.

This is just too funny not to share. My crush gets hurt during a ball game…

I ran up to [Mr Crush], who was still sitting against the wall, with his tear-away pants open at the knee. I put the kleenex on his knee and held it there. [Mr Crush] said he didn’t need it, but I showed him all the blood on the kleenex, and put it back on the wound. I took him by the wrist, and with a bit of force, for he was reluctant, I put his hand on the kleenex and put my hand on his, got up, and took my place in line.

Ooh, scandalous! Oh, the life and times of a 12-year-old girl who likes a boy. Is it really any different when one is in one’s twenties?

I have a whole book of poetry, too, including a poem about a raven from Copenhagen who said “nevermore.” I swear I had never read Poe. There was also some fairly mature and insightful stories and nonfiction, including some strongly political commentary — and this was at least 10 years ago — about America’s addiction to (pharmaceutical) drugs and fast food. The US population is even more overweight today, so nothing much has improved. 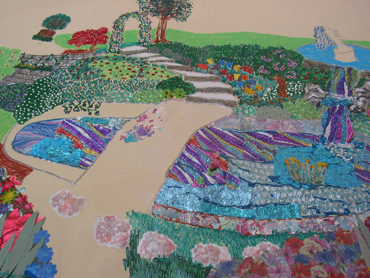 Amongst my childhood gems is evidence of really old technology. We worked on Macs in elementary school, and often used something called Hypercard — primitive Javascript, essentially — to create interactive stories which would then be printed out. Boy were the graphics low-fi back then. A particular story I’m not attached to is being kept half because it’s a demonstration of really ancient dot-matrix printers and black and white graphics, half because the front and back cover are laminated and bound with a short plastic coil, none of which I can recycle. (Lamination is SO not cool.)

After I’d purged some stuff I reorganized my closet and noticed that four years of Emily Carr studies produced MORE stuff in my closet than the 13 years prior. And I can say for sure that I did not keep everything from each stage of my schooling. A good amount of bulk is partly-used sketchbooks, but the main volume is actually too big for my closet: drawings and printed design material. A bulging portfolio case of first- and second-year life drawings overpowered the results of my high school art courses. And I had to go through every single charcoal-covered sheet. (Ack, toxic!) Most of it went in the recycling. I kept my favourites which I didn’t manage to whittle down to two, but the generous stack is a meaningful, carefully-chosen one. I photo-documented everything with merit and everything I kept. Here are some special ones. 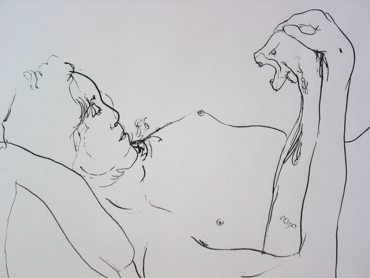 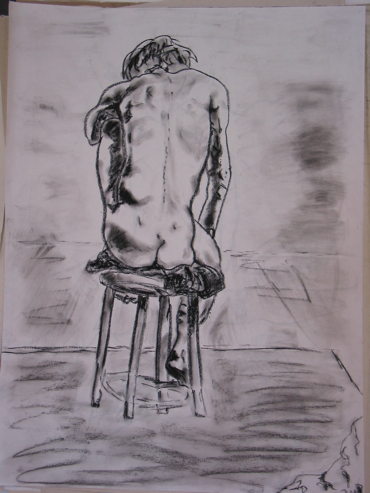 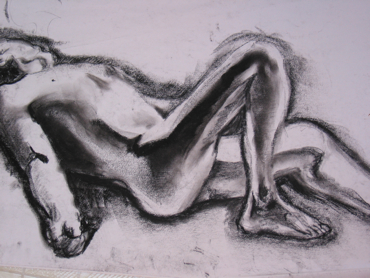 In this small space with a lot of wall real estate taken up by closets, a window, and new bookshelves, I’m unable to put up all the artwork I had on my walls before, including some that are old enough to have been on these walls before I moved out. This is disappointing, but hopefully I still feel narcissistic about them when I move out again so they’ll wind up on my walls eventually (framed, this time, I hope). In the meantime while some wall space is blank, I have a cluttered closet with many things that simply don’t have homes in my room or my conscience. What did you do with your high school memorabilia? With your awards? Sports trophies? Old games, cassettes and CDs you stopped listening to? In this day and age, while overwhelmed with stuff and rapidly changing technology, I’m glad I can document what I can’t keep. How about you?