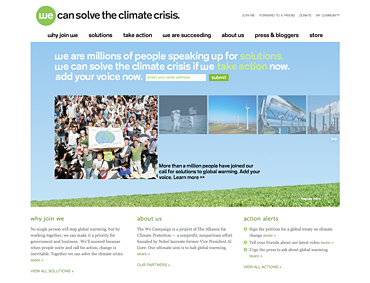 Via No Impact Man, thanks to my mother for the great link

Today Al Gore launched the We Can Solve It campaign, “a $300 million, 3-year campaign to educate the public about global warming and urge action from political leaders.”

Immediately on watching the video at No Impact Man, I was struck by the typography. It’s clean, modern, and I think appeals to the under-30 demographic that’s most likely to take the campaign to heart.

Climate action and other social change campaigns have been using great design to engage users and enable them to easily access and contribute to information. Web 2.0 features such as built-in videos (Flash, YouTube), coordination with social networking sites, and snazzy viral marketing help contribute to a greater awareness of causes. The “We” campaign takes the blogging network one step further by asking bloggers “to tell us about your blog, and we’ll periodically send you breaking news and relevant information.” How about that for free press! And that’s just what I’m doing — not only that but the information went from one blogger, to that blog’s reader (Mom), to me. And on to you.

Earlier tonight I read that the Western U.S. is heating up 70% faster than the global average, which reminded me that change is no longer optional.

I think that starting with simple initiatives (Earth Hour, changing to compact fluorescents), we can mobilize a greater public. Then there are the people who don’t care, who would rather do nothing or think individual actions make no difference: for these people I suggest government programs that make living sustainably the only option. I think this campaign will deliver on both.

Changing the way we live — the way we eat, how we transport ourselves, the products we buy and the medicines we use — isn’t so much adapting to something new, but rather something old. This is just my opinion but I think what we’re seeing is a trend and a need toward going back to our history of reliance on local economies, small farms, local businesses and manufacturers, and the ideas that existed before modern agriculture and transportation took over: to a time before Big Oil. I wasn’t around then, but neither were a good part of the people urging for change today: youth.

Tweet
Posted at 11:36pm.
NEXT Community solutions for food security and urban health, Part 1
PREVIOUS A night with the Foo Fighters