my gerbera looks like it’s dying, so i brought it over to my plant expert, mom. supposedly gerberas don’t like the west window and being too close to it is like an oven. i remember it used to wilt with too much heat. it obviously wasn’t dehydrated. most of its leaves wilted and turned brown. i also accidentally drowned it… will be checking the soil dampness with finger from now on… though i may not have to because it’s probably going to live on my desk from now on (if it lives!) so it won’t wilt up on the windowsill. the mini gerbera so far is doing fine, though. i did notice a few bits of the palm had fried to a crisp, though. they must have poked through the blinds when they were closed on a hot afternoon.

the gerbera needs to be repotted as its roots are poking out the bottom… which was in another pot with no holes so the poor thing was sitting in about a 1/4″ of water for god knows how long. it seems to be perking up now, though. i discovered a severed flower bud in the pot though, and i don’t know how long it’s been there, but *sniff*.

i’m rather attached to it, which people don’t understand, but it’s my plant and i love it. it has featured in artwork as well. (colour has been altered in the process.) 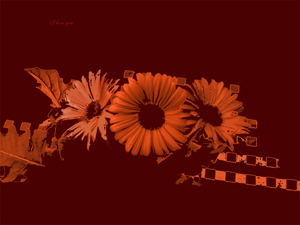 if this one dies, i’m going to buy another one. i’ve had it for a year, given to me with meaning. he says it’s about what it means, not the plant itself, but i do rather like the plant. it yields gorgeous flowers. for now i can only hope it will survive long enough to repot it soon and then flourish, but i think that’s it for flowers this year! maybe i’ll buy another one anyway or get some cut flowers.