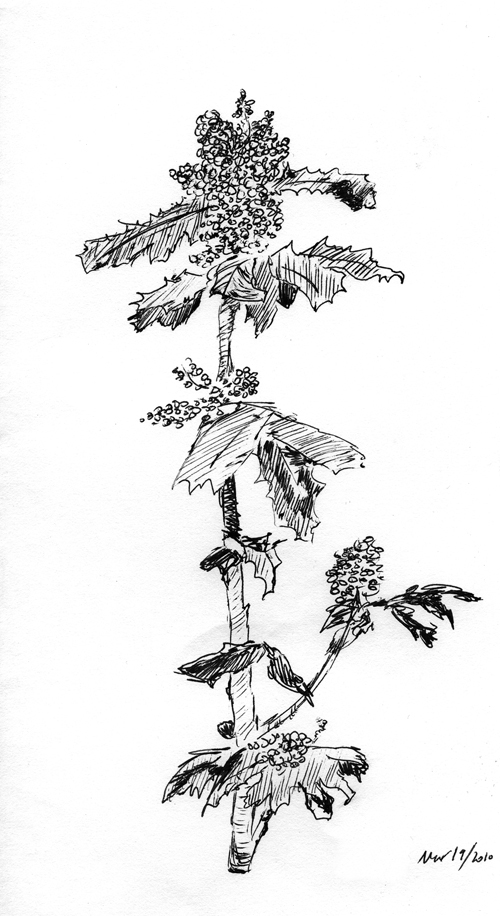 A day before the official first day of spring, my friend and I sat down on a Coal Harbour bench after a refreshing, sunlit bike ride around the seawall. He pulled out a sketchbook and pen and started sketching out as many sights as possible, as quickly as possible. That strategy, while energizing and capable of branding more visual memories, is not one I frequently employ. In fact, I hadn’t done any kind of artistic sketching for months — not since the fall when my visiting nieces, who are nuts about drawing, inspired participation. So when he tore a sheet from his sketchbook and handed it to me with a pen and a book for my lap, I felt a blushing hesitation, a brief resistance. An unfamiliarity with the drawing tool. Overcome that I was left just with deciding what to draw.

There was a large holly with yellow berries just ahead of me that provided the detail to which I’m addicted. I like to draw subjects as close to their form as possible, so botanical drawings are quite ideal, providing intricate and random shapes. I had forgotten this pleasure, as I had forgotten how much I enjoy capturing light and shadow (as much as I do looking at it). It took me a minute to get back into the swing of it, to have some patience and see it as a relaxing exercise with a tangible outcome. It’s so easy to just take photographs and yet if I remember anything vividly it’s the image of that holly, in full colour, not the pansies and daffodils I photographed two days later. That sure makes one think about the media we use to write memories.