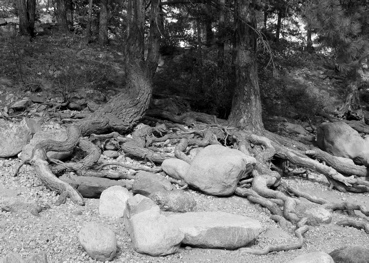 Here we are at Stemwinder Provincial Park, about 25 km east of Princeton, BC. The boyfriend has taken the car to the next town, Hedley, to get some foodstuffs and fishing bait. It’s a bit dusty and I’m on battery power so I won’t keep Peanut (that’s my laptop) on too long, but I thought it would be interesting to write a post while at the site rather than after. Obviously there’s no wireless here so I’ll post when I get home. (I brought Peanut along to watch The Departed one evening.)

We arrived yesterday afternoon to find Bromley Rock’s campsite full! I knew there was another one further down and we found it only half full with plenty of choices. This spot is quieter and today is only about as full so far as it was when we arrived; many people have left. 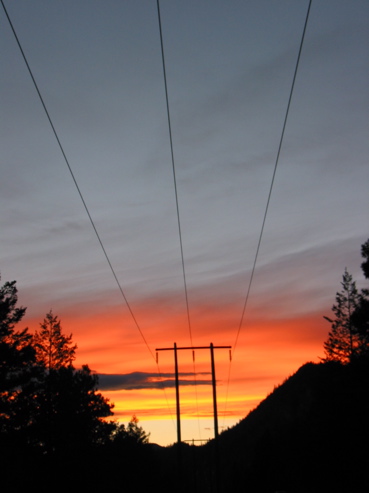 Yesterday I nearly killed myself trying to scale a steep, dry (aka slippery) slope back up from the riverside. I’m exaggerating a bit but I was on the verge of either yelping for help or sliding on my face back down the bank. Bad footwear. (A kid in slip-on sandals scaled it no problem; go figure.)

This area is very different from home, being on the other side of mountains. The Similkameen river flows through it at a quick pace down here. If it warms up I’ll go swimming. If the weather’s warm the day we leave we might stop at Bromley Rock for swimming: they have a beach and some amazing geological features. 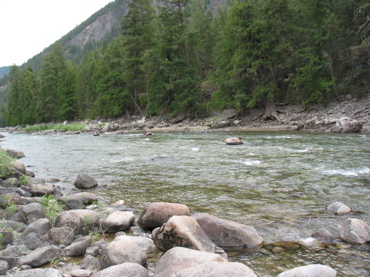 Last weekend, August long weekend, my family and I drove up to visit my sister, uncle and cousins in their respective towns outside of Kamloops, BC. My sister was having an “Unwedding” party with all of her friends and family who could make it. Great food and drink plus dancing (which I missed) and marshmallow roasting under a far-away display of nature’s electric glory was topped off by a refreshing dip in the Thompson River. (Well, refreshing for some, anyway. We won’t name names. Poor girl!) Meanwhile the honey had gone camping not far from our current location, to Messoula Lake between Merritt and Princeton. Together we had Tuesday to rest up, make plans and have a visit with my aunt, who took us out for a lovely and very filling dinner.

Our dinner outing meant we had a little extra chicken for our trip and cooked it last night with some potatoes and roasted red peppers and tomatoes. Yum! We should barbeque more often. There is still some leftover pasta from Tuesday’s dinner which is hopefully still cold enough to be safe to eat.

“The mister” insists I’ve never been camping before. That’s not really true… but this is my first time camping without parents or older siblings to do a good chunk of the dirty work and all of the planning. (We also don’t have a tent trailer, VW camper or RV thing.) All I’ve been responsible for in the past is packing my clothing and things to keep myself busy. For instance, when I was a kid on trips to Hornby Island, I’d pack a small suitcase neatly stuffed with an array of arts supplies. I guess I kind of wish I’d done that this time. Anyway, I’m learning now: bring more, not less. For the sake of packing light, I basically took two of everything (except dinner plates), and only brought plastic forks though I brought our dinnerware spoons and knives. He thought that rather silly. Hindsight is 20/20… I don’t know what I was thinking. Good thing I brought the knives, though. I also forgot to bring a lid for the plastic container meant for washing up — as it turns out, the damn thing seems to leak anyway. I forgot our old blanket, and to top it off, a bucket of some sort would have been great, for carrying water. (The plastic tub is a little flimsy, and as I mentioned, it leaks.) 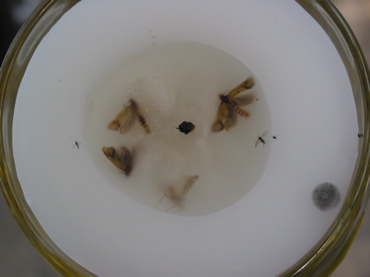 “Arr, she swallowed me whole.” The wasps flew too close to the sun and drowned in wax.

There are flies, of the house fly kind but smaller, absolutely everywhere and I don’t even know why. I’m tempted to stick a piece of fruit or meat out somewhere to distract them from our table!

The outhouse here is nicer than some public washrooms in Vancouver I’ve visited lately. Oh, hilarity: a sign in a rest stop washroom stall at the toll booth on the Coquihalla said something like “do not drink,” accompanied by a tap in a crossed out circle. This was an official sign telling users not to drink from the toilet? AHAHAHAHA! Is it because of some precedence? Too funny.

We have the whole day ahead of us today, and I don’t know what we’ll do, but relaxing is certainly in order. Ah, he’s back! Did you find any apples?

He did find apples; rather nice ones, and local too, which suits my fancy of course.

Later that day we went down for a nap; then began the drama: we awoke to the sound of rain lightly tapping our tent! I had opened the “skylight” and could see the tiny beads collecting on the plastic, so I knew for sure. Yes, dear, it’s actually raining, get up! We had fortunately moved camp that morning to a spot with more trees, and the tent wasn’t hammered into the ground so it was movable. We put up our tarp over the picnic table and tent. When finished, he sat underneath it, the tarp on his head, grumbling and generally feeling like this wasn’t such a good thing. I, on the other hand, thought it a great and exciting adventure! It would have been better illustrated with photographs, but let’s just say I was in fact smart for bringing a rainjacket and an umbrella. 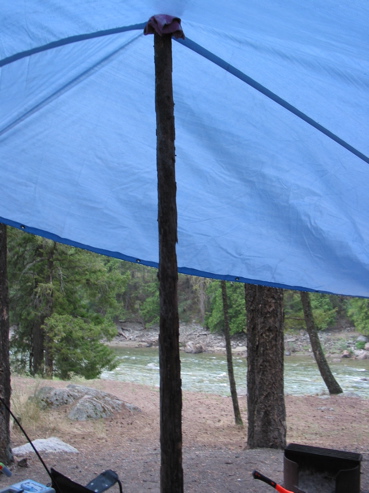 I suggested a pole to prop it up, so my manly man fetched one from the riverbank and chopped it to size. Wow! A veritable pole! I was, as usual, more enthusiastic, but I digress. (Again, some photos of the action would have been great, but there’s one.) 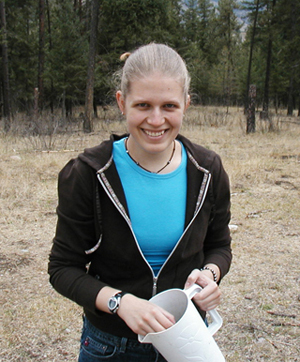 Erika remains “unfazed” by the situation. 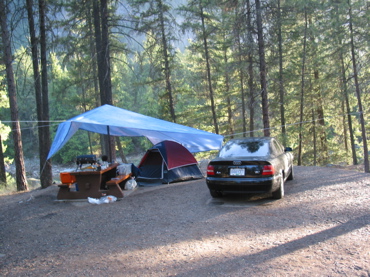 The sun comes out on our camp

Much later on the sun made a gallant appearance, gracing us with a rainbow. A quick hike would have found us the elusive pot of gold. I’m used to seeing it disappear over the water, so far away. The fisherman, feeling lucky perhaps? returned to the river and caught us a delicious rainbow trout. The cheeky creature made off with the cheddar cheese once, but not twice! The environmentalist in me was a little taken aback, thinking “this was alive, swimming around and now it’s dead,” but my grandfather, a Finn, would have been proud. Besides, the fish chomped so eagerly onto the cheese that my fisherman had no choice but to bring it in. 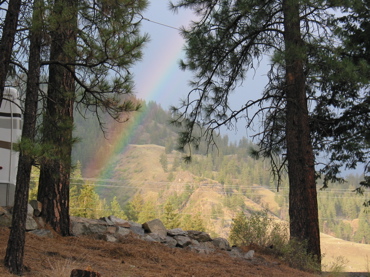 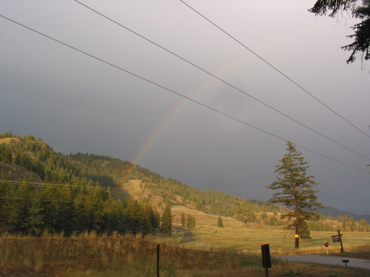 We enjoyed some hot chocolate — this time our drinks warmed much more quickly! — then retired to the tent for The Departed. Perfect: a rainy evening and a movie. Unfortunately, my late snacking and sipping meant I had to pull all my gear on again to run to the outhouse! It’s scawwy, please come with me! Being at home sure has its advantages.

If you had asked me this morning how I’d slept, I would have shouted “Terrible!” with a big grin on my face because, let’s face it, I make light of any bad situation. At the time (2am, 4am, 6am, whatever), I wouldn’t have been quite so upbeat. The air mattress had lost some (most?) of its strength (I was beginning to believe what my aunt said about air mattress thickness), and so my heavy womanly hips were dragging either my butt or my hips to the bumpy, hard, cold ground! The open sleeping bag was kicking around somewhere in the dark but that extra inch would have helped. My tentmate wondered grumpily what the heck I was doing, moving my backpack around trying to push some air my direction. It didn’t work. In my dreams I thought the bag of plastic forks was going to solve the problem. I was finally woken up again by the sound of rain, around 8am and had to get out. Nothing had gotten wet but our matches and matchbook were too damp to light.

I enjoyed a quiet breakfast of cereal with blueberries, and said farewell to our veteran (in more ways that one) camping neighbour. Who knows where the two were headed next?

It was too cool, though sunny, to stop at Bromley Rock so we headed home. It’s nice to be in our own bed again, but the break into nature away from civilization, hot sidewalks and noisy traffic was much needed. I’m looking back on it now in my memory: a peaceful place. I won’t let myself forget it. 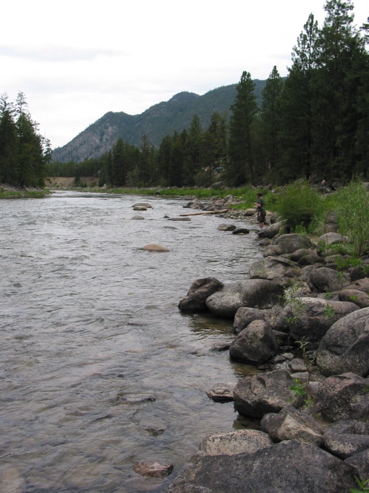 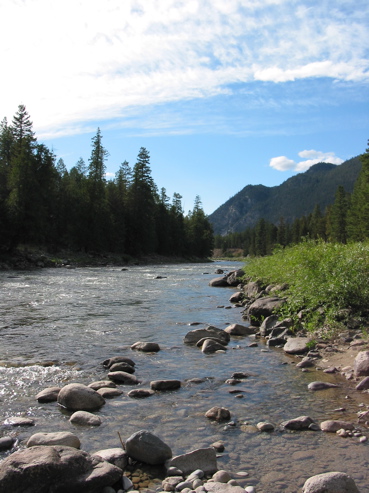 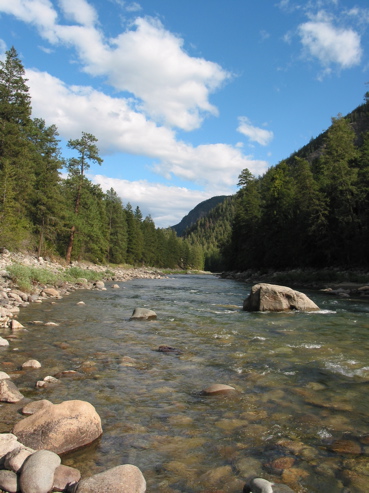 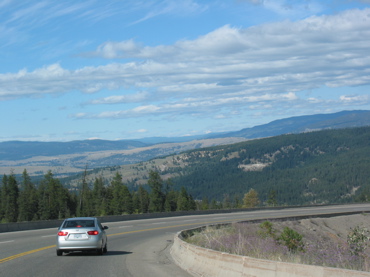 On the way there: the descent into Princeton

Tweet
Posted at 7:20pm.
NEXT Oh, you didn’t know? Shame on you!
PREVIOUS Monday lunch blog