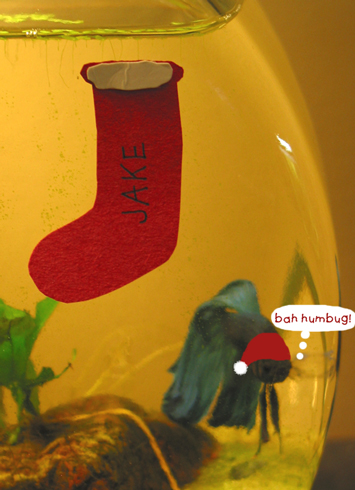 Wishing everyone a joyful season and happy holidays! Have a Merry Christmas and a Happy New Year!

I thought you might enjoy this animation I made for Christmas 2002. I edited it just now to slow it down a bit. (Flash player required.)

Last night we finally got a tree — just a little one, about 5 feet, and just the right size for the small number of decorations we have. I’ll take a few photos tonight now that the camera is charged up again. At last, the living room feels merry. Just adding a string of LEDs around the window (thanks, Mom and Dad!) — and now it’s actually around the window instead of dangling halfway across the wall to reach the outlet 🙂 — made a big difference. Adding the tree with presents underneath really makes it sparkle, and makes ME smile every time I walk into the room. I managed to clean the living room quite nicely, then messed it up again wrapping presents! On the other hand, the kitchen is clean at last, with a beautiful holly-print table runner, some candles and my mother’s angel chimes in the middle. My Santa mug and more candles decorate the stove. (We have a small kitchen with no window, so the stove ledge acts as a windowsill.)

This time of year, and especially this year, my pride in my heritage comes out. This year is different because I’ve moved out, so I’m doing my very own decorating for my very own home. No more paper chains or anything kiddy like that, though I wonder where my Santa Claws picture went? Christmas for me is a combination of my two backgrounds, Finnish and German, which both have very strong and different Christmas (Joulu and Weinachten) traditions. My mother has always been able to integrate the two with flair and success, such as baking stöllen with a Finnish twist. I think, anyway. Our baking traditions have varied and changed over the years, and I miss plum tarts and pulla, but we’ve continued to bake gingerbread and rum balls. This year the rum balls were my eager responsibility, with less rum than last year! As it turns out, my boyfriend quite enjoys them, and the gingerbread, too. Since he doesn’t like the Finnish pulla, I’m happily eating it all myself! with some India Spice Chai + eggnog = perfection.

Decoration-wise, I quite prefer European (especially Scandinavian) style to North American. I adore tasteful and creative things made of wood, straw, cloth, glass, and sometimes metal. Red and green abound. I also adore unique, hand-crafted things. Despite that, I wanted IKEA decorations, but they were hand-made too. Hand-made in Asia, I think, which kind of defeats the purpose, but I don’t have the skills to make them myself, so I’ll settle for that. IKEA unfortunately ran out of most of what I wanted, but I managed to accumulate enough from Mom’s collection to get by, including plenty of old-fashioned glass balls that were her mother’s. (This is also a good time of year to remember the beloved members of my family and a certain friend who have passed.) So the holiday season makes me gravitate toward the traditional decor and remember where my families are from.

I forgot to buy beeswax sheets and wick to make candles, but oh well. Too late now! In the meantime, I have plenty of cards to make. It’s a wonderfully personal thing to do, AND it saves money as well since I was able to get 10 small cards for the price of one large one. I already have the necessary tools to craft cards, including sparkles I’ve had for a good ten years that I’ve never used up.

Well, I’d best get on with Christmas preparations. I need to make some shortbread. Yum!