I wrote recently about my pink gerbera being on its last legs. Well turns out it must have just gotten too hot in the windowsill, oh, and I drowned it by accident, so I gave it some breathing room and am keeping it away from the heat on my desk. (The other two aren’t as picky, humph.) As it turned out, that was just what it needed (along with some plant food), and now it has FIVE new leaves! (*Edit June 29: make that seven!) Four appeared pretty much at once. I think they came up while we were out of town for a few days. A fifth appeared a few days ago and is growing quickly. At my man’s advice (quite the plant lover he is; I’m impressed!) I snipped off the three droopy leaves that hadn’t recovered, and I think in the act of doing so I accidentally pulled out a new leaf. NOOO! So I stuck it back in the earth in the hopes that it would root itself. I’m sure it’s not even worth a try but whatever. I’ve had miracles happen before. Anyway one of the new shoots is growing so fast that it has overtaken the oldest new one! (from before it started losing leaves) So I’m rather happy at its success. This weekend I’ll repot it and will probably have to spray insecticide on it as well. It seems to have mites or some other near-microscopic insect. The orange gerbera had outgrown its pot when we bought it so it needs a new home too. I can only carry so much on the bus, though, so I think that one may have to wait unless I can borrow some dirt. I should have bought a plastic pot for it as the blue one doesn’t have a hole in the bottom, and I should have bought an extra saucer for the big one. Whoops.

I figure even if that vine in the living room survives, its green limbs are so sparse it’s not worth keeping. I’d move it to the office where it would get more light (I think that’s the main problem) if I didn’t think it would SHED EVERYWHERE. Sigh. 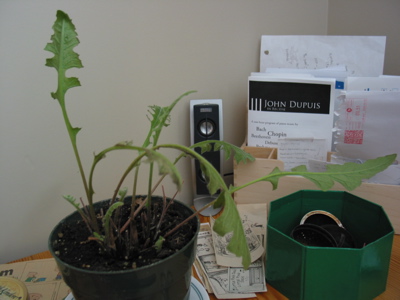 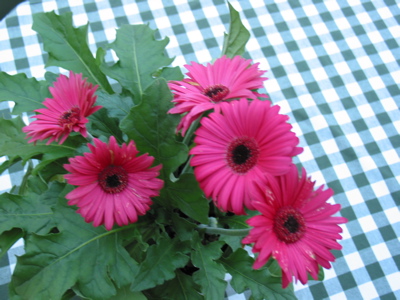 my gerbera in all its glory, last summer